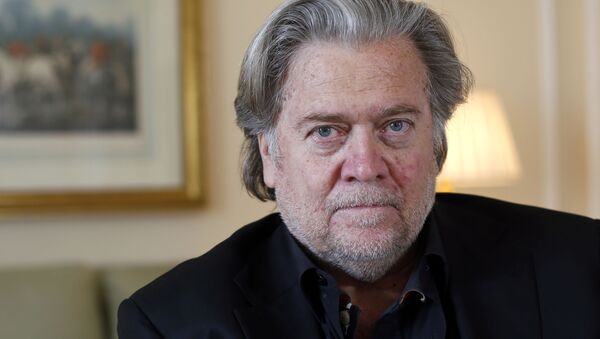 The billionaire Barclay twins, who currently own the Daily Telegraph, reportedly plan to dispose of their asset for less than a third of what they paid for it in 2004.

One of Britain’s most popular newspapers, The Daily Telegraph, may soon be sold to Donald Trump’s former chief strategist.

Speaking to The Times, Steve Bannon described The Telegraph as “one of the great untapped properties.”

“Not sure they really want to sell, so may be [a] total waste of time,” he added, however.

The Telegraph is considered a Conservative-leaning publication with a decidedly pro-Brexit agenda. Bannon now reportedly wants to move the newspaper further to the right under his leadership.

Steve Bannon, 65, is a former investment banker and Hollywood executive producer. He came to prominence after co-founding conservative website Breitbart News, where he was the executive chairman between 2012 and 2016.

Bannon was the head of Donald Trump’s 2016 presidential campaign and served in the Trump administration as the chief strategist and senior counselor for seven months before his departure in August 2017. For the past two years, he has been trying to forge a European alliance of right-wing parties opposed to the EU governments while also coming out as a Brexit supporter.

David and Frederick Barclay, the billionaire identical twins, acquired The Telegraph Group (now Telegraph Media Group), which includes The Daily Telegraph, The Sunday Telegraph, and The Spectator, from US publishing house Hollinger International for £665 million ($854 million) in July 2004. Back then, the company’s operating profit stood at £32 million ($41m).

With readership shifting online and much of the advertising money turning to digital platforms such as Facebook and Google, TMG’s operating profits were down double-digits to £8.1 million pounds last year, while pre-tax profits fell to just £900,000. The company blamed this on “the structural decline across the industry in print advertising and circulation.”

As first reported by The Times, the Barclay brothers, who are estimated to be worth £8 billion ($10.3bn), are now reviewing the ownership of their many businesses, which also include delivery company Yodel, retailer Shop Direct and the Ritz hotel in London’s Piccadilly.

A source familiar with the matter confirmed to The Times that the sale of the Telegraph Media Group “was being discussed but that no deal was imminent”.

The TMG is expected to run a potential buyer about £200m ($245 million). The rumoured would-be owners include the parent company of the Brexit-backing Daily Mail and The Washington Post owner Jeff Bezos.

A 2017 Forbes report put Bannon’s net worth between $9.5 million and $48 million – depending on the value of his consultancy, Bannon Strategic Advisors, and his eponymous film company – so the question remains whether he will be able to fork over a six-digit sum.