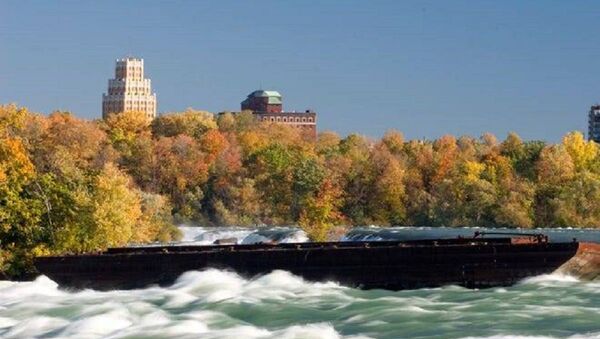 © Photo : Twitter screenshot
Subscribe
A boat stuck on rocks above Niagara Falls for more than a century has been unmoored by high winds and heavy rains on Halloween night, moving downriver about 150 feet.

Niagara Parks, an agency of the government of Ontario, Canada, posted to social media on Friday a video showing the boat grounded in a new location. The agency said the boat, an iron dumping scow, got stuck after an incident on August 6, 1918, where the barge broke loose from a tugboat. It's the first time it's moved any appreciable distance for more than a century, according to the agency.

The severe weather conditions experienced yesterday have caused the iron scow, which has remained lodged in the powerful upper rapids above the Falls for over a century, to shift significantly from its position.

At the time when the vessel got stuck two men were rescued in a joint effort between the US Coast Guard and local authorities. The men opened dumping doors in the bottom of the barge in a successful attempt to slow the boat from being carried away by the current. Since then, the boat has been stuck near the edge of Horseshoe Falls exposed to the water current and weather. However, the severe weather and heavy currents resulted in the boat being "turned and twisted," according to Jim Hill, Senior Manager of Heritage for Niagara Parks Commission. He said the boat had also flipped on its side.

“We think it’s about 50 meters downriver from its original location," he said.

How long the boat will remain in a new position remains unknown.