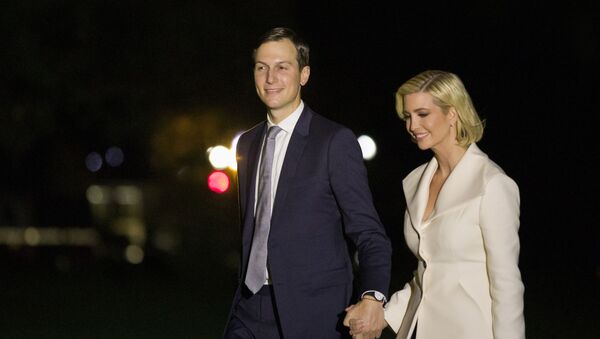 As part of a Freedom of Information Act lawsuit by CNN and BuzzFeed News, the Justice Department has released hundreds of pages of previously-unseen interview notes, emails and other documents from Robert Mueller’s investigation.

Steve Bannon, Donald Trump’s erstwhile campaign manager and chief strategist, has apparently worked to damage presidential adviser Jared Kushner by pedalling his links with a mystery Russian billionaire, according to the newly-released interview summaries relating to the Mueller Report.

Bannon, whose seven-month White House stint was marked by widely-publicised clashes with other administration officials, was known to have a fall-out with Kushner, the president’s son-in-law and a senior White House adviser.

A summary of the Mueller team’s interview showed that Bannon learned about Kushner’s vacation off the coast of Croatia with a “Russian millionaire” at the time when he took over the Trump campaign in August 2016. 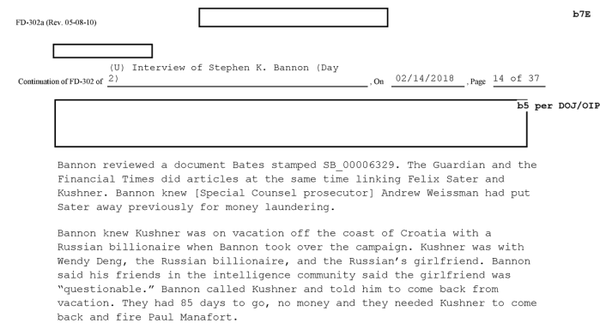 A screengrab of the interview note released by the Justice Department on Sunday
© Photo : Screenshot

Bannon is the co-founder and former executive chairman of conservative website Breitbart News. In a July 2017 email exchange, Bannon and an unnamed Breitbart employee described an investigative story in The Guardian about Kushner’s alleged business ties with Russian-Israeli diamond mogul Lev Leviev.

“This is big though isn’t it? It’s the ball game,” the Breitbart staffer asked.

Bannon replied: “All and everything.”

The reporter then brought up rumours that Kushner had a meeting with WikiLeaks representatives in 2016, but admitted there was “nothing to verify yet.”  WikiLeaks had then recently published a trove of leaked documents from the Democratic National Committee. There have been unconfirmed allegations that the hack was conducted with the knowledge and support of the Trump Campaign, which the latter strenuously denied.

Bannon wrote in response that Kushner “was on ‘vacation’ off the coast of Croatia with a Russian billionaire when I took over campaign.”

“How do we prove that?” the Breitbart employee replied. “That’s game set match.”

Bannon told Robert Mueller that “Kushner was with Wendy Deng, the Russian billionaire, and the Russian’s girlfriend.” Wendy Deng was the third wife of media mogul Rupert Murdoch; the two divorced in 2013. 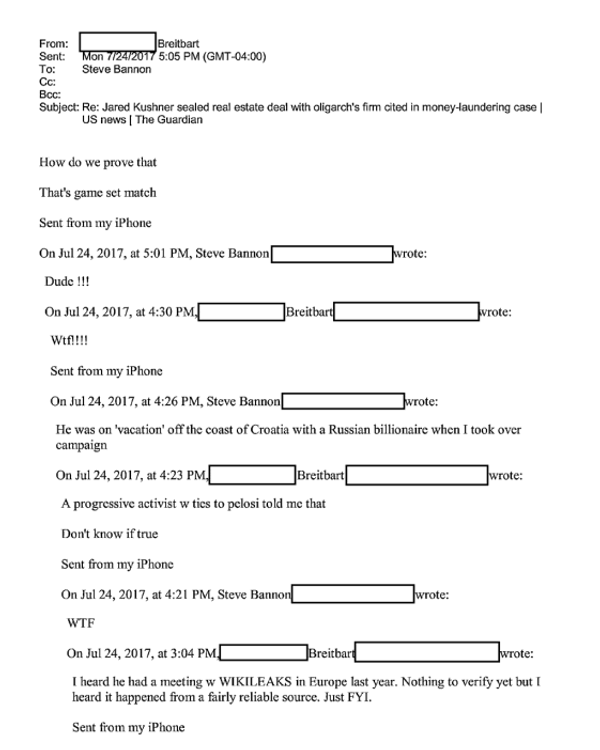 A screengrab of the email exchange released by the Justice Department
© Photo : Screenshot

Bannon’s sources in the intelligence community told him the Russian’s unnamed girlfriend was “questionable.” And he recalled Kushner to Washington. “They had 85 days to go, no money and they needed Kushner to come back and fire Paul Manafort,” the interview notes read.

The Daily Mail reported in August 2016 that Kushner and his wife, Donald Trump’s daughter Ivanka, spent some time on the $200-million boat of billionaire Democrat donor David Geffen off the coast of Croatia. The newspaper even obtained several photos showing the two sunbathing aboard the boat.

It’s unclear which – if any – Russian national was on board the yacht. His identity is not revealed in the notes, and there was no mention of a ‘Russian billionaire’ in the Daily Mail’s 2016 report.

It seems that neither Bannon nor Breitbart managed to confirm the presence of the mystery Russian man as no related reports have seen the light of day. Jared Kushner is yet to comment.