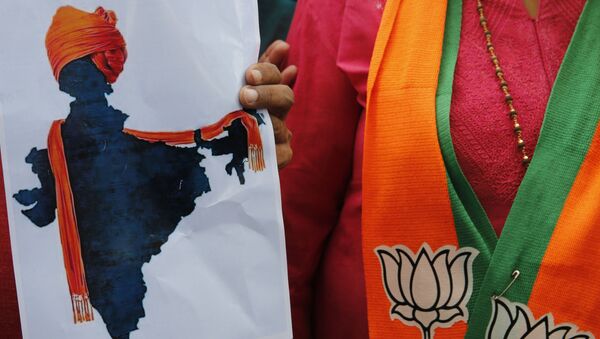 New Delhi (Sputnik) - The new political map was released two days after the Indian decision to change the constitutional status of Jammu and Kashmir and Ladakh came into effect. The move has upset Beijing, which termed New Delhi's move "unlawful and void".

India on Saturday released a new political map of India showing the administrative boundaries of the newly formed Union Territories of Jammu and Kashmir, and Ladakh.

"New Map showing the Union Territories of Jammu & Kashmir and Ladakh, as these exist after 31st October, 2019 (sic),” India's Minister of State in Prime Minister Office Jitendra Singh tweeted along with map.

​The home ministry also issued a separate notification with the details of boundaries which shows Aksai Chin, which is currently administered by China, as part India's Ladakh.

"India unilaterally changes its domestic laws and administrative divisions challenging China’s sovereignty. This is unlawful and void and this is not effective in any way and will not change the fact that the area is under actual Chinese control," Chinese foreign ministry spokesperson Geng Shuang said.

"We do not expect other countries including China to comment on the matter which is internal to India; just as India refrains from commenting on internal issues of other countries," said ministry spokesperson Raveesh Kumar.

The administrative status of the state changed after the Indian Parliament abrogated Article 370, providing special status to the former state.

Aksai Chin was ceded to China by Pakistan in 1963 when both countries signed a boundary agreement to settle their border differences in Pakistan administered Kashmir and Xinjiang.