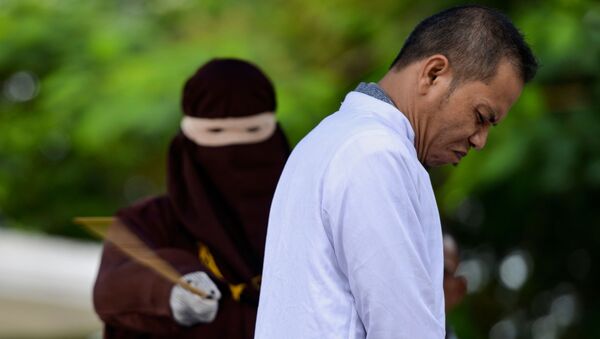 Having sex outside of marriage is prohibited under Sharia Law, which has been enforced in the conservative Indonesian province of Aceh for over a decade now. Other offences punishable by caning include gay sex, drinking alcohol and gambling.

An Indonesian man who worked for a council that helped draft strict adultery laws has been caned after it was revealed that he was himself having an affair with a married woman.

Mukhlis bin Muhammad, a member of the Aceh Ulema Council, was publicly flogged by a masked officer 28 times on Thursday. His supposed mistress received 23 strokes of the cane. The two were apparently caught by officials in a car parked near a beach in September this year.

The province of Aceh is the only region in the Muslim-majority country where Sharia law is practised officially, as part of a 2005 deal with the central government that granted Aceh wide-ranging autonomy and pacified a decades-long guerrilla movement. 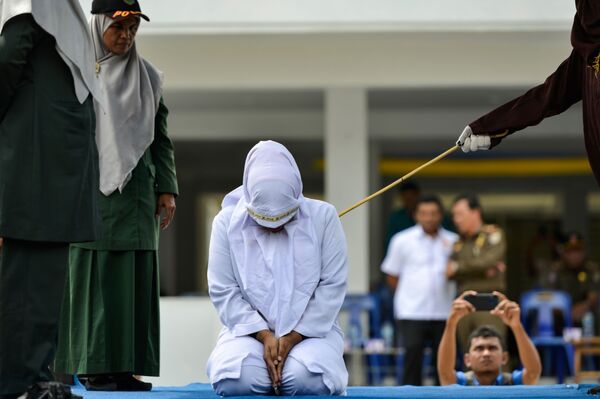 A woman is whipped in public by a member of the Sharia police in Banda Aceh on October 31, 2019, after being caught having an affair with Aceh Ulema Council (MPU) member Mukhlis.
© AFP 2022 / Chaideer Mahyuddin

The Aceh Ulema Council is a clerical organisation that advises the regional government on religious affairs, including the drafting and implementation of Sharia Law.

Mukhlis is reported to be an Islamic religious scholar and leader; his role in the council was not disclosed. The deputy mayor of the district where Mukhlis lives told the BBC that the man would be dismissed from his position.

Other offences punishable by flogging in Aceh include homosexuality, the consumption, production and distribution of alcohol, rape, sexual harassment, gambling and public displays of affection. The law there applies to Muslims and non-Muslims alike.

Adultery is mostly criminalised in countries where the dominant religion is Islam, with several notable exceptions, such as the Philippines, Taiwan, and several US states (where the ban isn't strictly applied). South Korea scrapped its anti-adultery laws in 2015, and India followed suit last year.