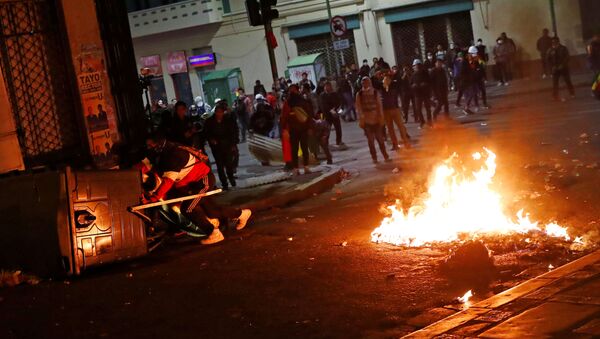 The US has called on Bolivia to cooperate with the Organization of American States (OAS) to ensure a "transparent" and "credible" vote count and to hold a second round of presidential elections following Movement for Socialism leader and Bolivian President Evo Morales’ victory last week.

However, the OAS is merely a “political tool” the US is using in an attempt to remove Morales from office, Patricio Zamorano, co-director of the Council on Hemispheric Affairs, told Radio Sputnik’s Loud and Clear Friday.

“I have seen all the data, especially [a] complete, complete analysis done by CEPR, the Center for Economic and Policy Research, and they explore all the data coming out from the polls … the election was totally transparent. The numbers are correct. Evo Morales actually enjoys very good support from the majority of the country, not just based on ideological terms. The country is really, really doing great. So, in fact, I would say that the numbers are the numbers,” Zamorano told hosts Brian Becker and John Kiriakou.

“The OAS is really not a reliable source right now. We have to remember that is the same OAS … that, for example, validated the fraud in Honduras,” he continued. The US and the OAS recognized the reelection of Honduran President Juan Orlando Hernández in 2017, “despite the clear signs of fraud,” Zamorano explained.

Earlier this year, the United States orchestrated the removal from the OAS of Venezuela, whose president, Nicolas Maduro, is a close ally of Morales’; however, the Caracas envoys decided to leave before the deadline for their ouster.

“Argentina, Brazil, Colombia and the United States believe that the Bolivian people have the right to choose their leaders in free and fair elections," they said in a joint statement. "We urge Bolivian electoral authorities to work with the Organization of American States Electoral Observation Mission to guarantee a transparent and credible vote-counting process."

The four countries are also part of the Lima Group, an international coalition of 14 countries assembled by Washington in 2017 with the explicit goal of forcing Maduro from office.

“So, we are very afraid of the what the OAS is doing now. It seems it's just a political tool of the US for its policy. And it’s unacceptable … The OAS has this very sad story of being basically, especially in the ‘60s and ‘70s, where all the revolutionary movements were trying to break with the establishments … the OAS was there as a weapon to impose their view, their foreign policy, their ideological framework. So, that’s part of history,” Zamorano explained, also noting that OAS Secretary General Luis Almagro is “acting as an activist of the US foreign policy.”

“For the last month, we have seen a change in the political environment of the [South American] continent,” Zamorano said, referring to the recent outburst of protests in several South American countries, including Chile and Ecuador.

“I would say … that the right-wing organizations and actors of the continent are starting to get a little desperate.  We have to remember that Bolivia is in great shape … We have an unemployment rate that’s marginal, about 4%. The GDP … of Bolivia is one of the best ones in the continent - an average of [between] 4 and 5%. We have inflation that is marginal - no more than 2-3%. The poverty rate under Morales went from 60- something percent to 30%, and extreme poverty went from 30% to 15%. The results are undeniable  - great results, because Evo Morales is putting a lot of effort into the social agenda,” Zamorano said, also noting that the fruits of Morales’ efforts are evident in the “quality of life of the Bolivian people.”