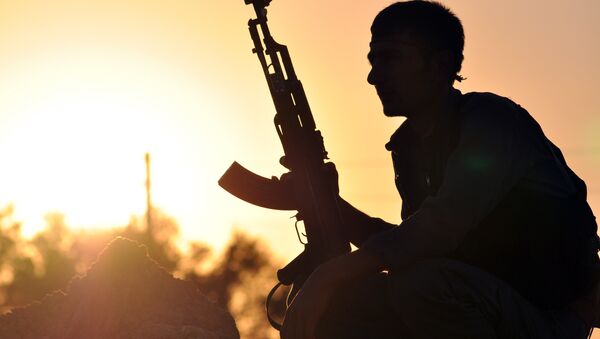 "We are prepared to join the forces with Assad but restructuring, changing the Syrian army. If we agree with the Syrian regime about how we are managing our areas, and then yes, we are ready to join the Syrian army," Ehmed said, stressing that it "cannot happen in an hour," as there should be discussions with Damascus first.

"What happened is the Defence Ministry released the statement where they are addressing us like criminals," she added.

"So, the SDF said 'no.' We have to sit together and agree on how we are going to be integrated together, not like join as we are the fugitive," Ehmed said.

The SDC is a political branch of the Kurdish-led Syrian Democratic Forces operating mostly in northeastern Syria, where Turkey recently launched an anti-terrorist offensive.

On Wednesday, the Syrian government called on Kurdish fighters in northeast Syria to join the army to stave off Ankara, state media reported.

Speaking of Kurds' involvement in political life in Syria, Ilham Ehmed said that Syrian Kurds are seeking the help of the United States in becoming part of Syria's political system.

When asked whether Washington is doing anything to assist the Kurds in this regard, Ehmed stated, "We have not seen anything yet from American side."

UN Special Envoy for Syria Geir Pedersen said Monday, ahead of the launch of the Syrian Constitutional Committee, that there were representatives of Kurds in the new body, but none linked to the military wing of the SDC — the Kurdish-led Syrian Democratic Forces.

The 150-member Syrian Constitutional Committee is currently convening for the first time in Geneva. Representation within the body is split equally between the nation's government, opposition and civil society. It also has the smaller committee within it that includes 45 people — 15 from each of the three represented groups — that will prepare constitutional initiatives, while the larger body will be responsible for adopting them.

US Continues to Supply Arms to SDF, Has No Plans to End Deliveries - Kurdish Politician

The United States continues to supply weapons to the Kurdish-led Syrian Democratic Forces and is not planning to end its arms deliveries, Ilham Ehmed said.

"They do [continue to send weapons]," Ehmed said, stressing the United States did not have any plans to end its arms deliveries at the moment.

According to her, the United States will keep sending weapons if the SDF continues fighting the Daesh.

"They have to help us because we have nothing. Turkey is attacking us, and they are doing genocide against us," Ehmed said, referring to Turkey's campaign in northeastern Syria.

On 9 October, Turkey launched Operation Peace Spring to clear the border area of the Daesh* terrorist group and Kurdish militia, labeled as terrorists by Ankara. The United States and Turkey came to an agreement on 17 October for a 120-hour ceasefire in the area to allow the withdrawal of the Kurdish fighters.

As the five-day ceasefire came to an end, Turkish President Recep Tayyip Erdogan and Russian President Vladimir Putin signed a memorandum. According to the agreement, comprising 10 clauses, Russian military police and Syrian border guards are facilitating the withdrawal of Kurdish militia, whom Ankara views as terrorists, from the 18-mile safe-zone on the Syria-Turkish border within 150 hours, and Ankara and Moscow have started joint patrols.