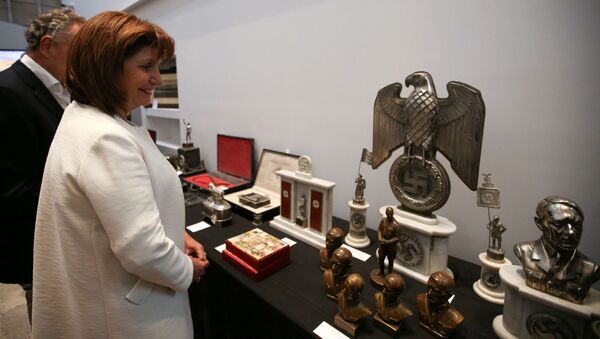 © REUTERS / AGUSTIN MARCARIAN
Subscribe
After discovering a collection of Nazi items in a secret room during an investigation by Interpol in 2017, authorities believed that they may have been brought into the country by top Third Reich officials escaping Europe after WWII.

Stephen Klingen, from Munich’s Central Institute for Art History, who was invited by Argentina to analyse a collection of 83 alleged Nazi artefacts, has raised doubts about the legitimacy of the articles, according to the Guardian on Friday.

Klingen concluded that the 83 objects are either complete fakes or original pieces from the 1930s which had swastikas and other Nazi symbols added at a later date.

The Guardian reported than Klingen said in an email that “You can display the objects as counterfeits, but you cannot learn anything about the Nazi era from them”.

Klingen also said he was shocked by the way the Argentinian authorities handled the objects and that he had issued a report to the chief of federal police, Néstor Roncaglia and security minister Patricia Bullrich last year stating unequivocally that the artefacts were almost certainly all forgeries.

He also attached to his 8-page report a 280-page addendum explaining how he reached his conclusions on a piece-by-piece basis.

The skull-measuring device was constructed between 1890 and 1910, according to the report, and therefore has no association with the Nazi period from 1933 - 1945.

The case of the device reads “Amt für Rassenpolitk” (“Office for Racial Politics”), but no official Nazi office functioned under that name, Klingen said.

Klingen explained that the handful of objects which may be genuine include: 3 toolboxes from a Mauser munitions factory, part of a grenade launcher, a swastika encrusted sundial, a Nazi-era newsreel, and various Hitler busts.

“Because we were not allowed to do material investigations, even their authenticity could not be checked conclusively”, he said.

When asked if the artefacts were of enough historical significance to warrant a display at a museum about the Holocaust, Klingen said: “No, absolutely not”.

​Despite Klingen's doubts, the Museo del Holocausto is planning to host the display of selected items on the basis that they may still have some educational value.

“They are original objects – original from the period – even if they were modified later”, said Jonathan Krszenbaum, the director of the museum.

“The skull-measuring instrument, even if the swastika was added later, is still from the Nazi period, or from the pre-Nazi period, and as such it has educational value because it exemplifies the Nazi obsession with the question of race.”

He added that “they are not forgeries – they are originals which were adulterated later. That doesn’t reduce their historical significance."

The collection of 83 items is ready to be placed on display next month, and includes a giant silver Nazi eagle, a Ouija board decorated with Nazi symbols, and a swastika-emblazoned device for skull measuring, and will be displayed in December once the museum reopens after undergoing a $4.5 million renovation.

“It’s been proven that they are real”, the president of the museum, Marcelo Mindlin, said at the press preview last month, adding that the artefacts were from "the time of the second world war".

Mindlin says that the items may have been brought to Argentina by fugitive Nazis, which would be consistent with stories of Nazi war criminals escaping to Argentina after the fall of the Third Reich, including Adolf Eichmann and Josef Mengele.

The objects were discovered behind a fake wall at the home of Buenos Aires antiquarian Carlos Olivares, who is currently awaiting trial for allegedly bribing customs officials in order to smuggle antiques from Asia and Africa into Argentina.

000000
Popular comments
According to Sharkhunters . com , a non-political WWII historical research site, AH and wife lived in Argentine until his death in 1955.
spirited
2 November 2019, 02:04 GMT1
000000
The artifacts are probably complete fakes along with the Holocaust. The so-called gas chambers were not gas chambers- they were crematoriums. If the Holocaust was true, why was it not mentioned in the Nuremberg trials? The first mention of a Holocaust appeared in the early 70’s- well after the war. There’s too much evidence against a Holocaust.

Preterist-ADSeventy
2 November 2019, 06:47 GMT1
000000
Newsfeed
0
New firstOld first
loader
LIVE
Заголовок открываемого материала
Access to the chat has been blocked for violating the rules . You will be able to participate again through:∞. If you do not agree with the blocking, please use the feedback form
The discussion is closed. You can participate in the discussion within 24 hours after the publication of the article.
To participate in the discussion
log in or register
loader
Chats
Заголовок открываемого материала
Worldwide
InternationalEnglishEnglishMundoEspañolSpanish
Europe
DeutschlandDeutschGermanFranceFrançaisFrenchΕλλάδαΕλληνικάGreekItaliaItalianoItalianČeská republikaČeštinaCzechPolskaPolskiPolishСрбиjаСрпскиSerbianLatvijaLatviešuLatvianLietuvaLietuviųLithuanianMoldovaMoldoveneascăMoldavianБеларусьБеларускiBelarusian
Transcaucasia
ԱրմենիաՀայերենArmenianАҧсныАҧсышәалаAbkhazХуссар ИрыстонИронауОssetianსაქართველოქართულიGeorgianAzərbaycanАzərbaycancaAzerbaijani
Middle East
Sputnik عربيArabicArabicTürkiyeTürkçeTurkishSputnik ایرانPersianPersianSputnik افغانستانDariDari
Central Asia
ҚазақстанҚазақ тіліKazakhКыргызстанКыргызчаKyrgyzOʻzbekistonЎзбекчаUzbekТоҷикистонТоҷикӣTajik
East & Southeast Asia
Việt NamTiếng ViệtVietnamese日本日本語Japanese俄罗斯卫星通讯社中文（简体）Chinese (simplified)俄罗斯卫星通讯社中文（繁体）Chinese (traditional)
South America
BrasilPortuguêsPortuguese
NewsfeedBreaking
13:45 GMT'Three Civilians Killed in US Airdrop Operation' in Syria's Deir ez-Zor
13:21 GMTIraq Arrests Activists, Ministry Employee for Calls to Normalise Ties With Israel
13:20 GMTMali to Explore New Security Partnerships As France Ends Sahel Operation
13:18 GMTMerkel's Potential Successor Laschet Reveals His Vote Preference in Election Blunder
13:11 GMTWomen to Dominate Iceland's Parliament for First Time Ever, Reports Suggest
13:09 GMTBlast Kills Taliban Intelligence Officer in Eastern Afghanistan, Source Says
13:00 GMTGermans Head to Polls to Choose New Bundestag
12:51 GMTDozens of New Yorkers Stage Anti-Vaccine Protest at a Food Court Chanting F**k Joe Biden
12:41 GMTFour Inmates Dead, One Injured in Attempted Jailbreak in Philippines, Reports Suggest
12:40 GMTVirginia Giuffre to Reportedly Hand Prince Andrew Secret Doc Able to Defeat Her Lawsuit
12:37 GMTRussia Scrambles Three Su-35 Jets to Escort US B-52 Bomber Approaching Border in Pacific Ocean
12:32 GMTCyclone Gulab Likely to Make Landfall in India on Sunday Evening
12:21 GMTUN Chief Warns 'Humanity Unacceptably Close to Nuclear Annihilation'
12:09 GMTKremlin Says It Hopes for Consistency on Minsk Agreements From Germany After Merkel Leaves
12:02 GMTRussian Presidential Spokesman Says Gazprom Fulfilling All Obligations
11:54 GMTLabour Leader Says It's 'Not Right' to Say Only Women Have a Cervix
11:43 GMT'F**k Them': Carlson Responds to Yet Another Call to Fire Him Over 'Great Replacement' Theory
11:42 GMT'Piece of Scum': UK Labour Deputy Leader Lashes Out at Tories
11:14 GMTUK Transport Minister Calls on Britons to Behave Normally, Says There is No Shortage of Fuel
11:12 GMTHamas Has No Place in Sudan But Will It Give Up on Former 'Base'?