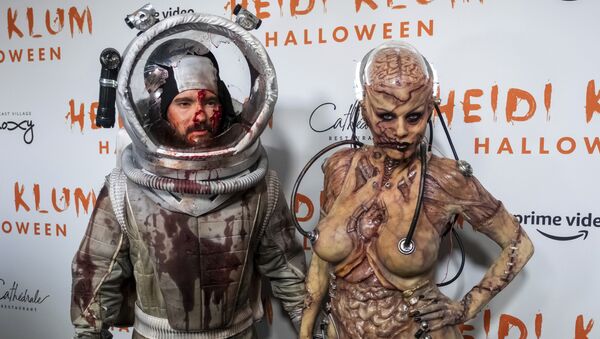 © AP Photo / Charles Sykes
Subscribe
International
India
Africa
The process of creating and putting on this bizarre-looking costume apparently took quite some time, with Heidi Klum documenting it and sharing it with her fans via social media.

German model and TV personality Heidi Klum seems to have managed to cause quite a stir both offline and online thanks to her dramatic appearance at her 20th Annual Halloween Bash in New York City.

According to the Daily Mail, the celebrity managed to give the attendees “the shock of a lifetime” as she emerged wearing a costume of a “gory humanoid alien” and accompanied by her husband Tom Kaulitz dressed in a bloody space suit.

The process of creating and putting on the costume apparently took several hours, with Heidi documenting these efforts on her social media.

Klum’s stunt evoked a barrage of praise from the social media crowd, with people complimenting her costume.

She has arrived!!!! Heidi Is here and I don’t know what she is but it’s a killer costume that took 12 hours #HappyHalloween #Halloween19 #HeidiKlum pic.twitter.com/MYZI4vSznS

I always admire Heidi's commitment to the grotesque. Being rich and model gives you a million options that are a lot safer and equally elaborate. My stomach lurched a little looking at this, which means it's awesome.

There were those, however, who had some rather peculiar ideas about this situation.

Just another demonic ritualistic role play for entertainment of those who lurk in the shadows.
Next!