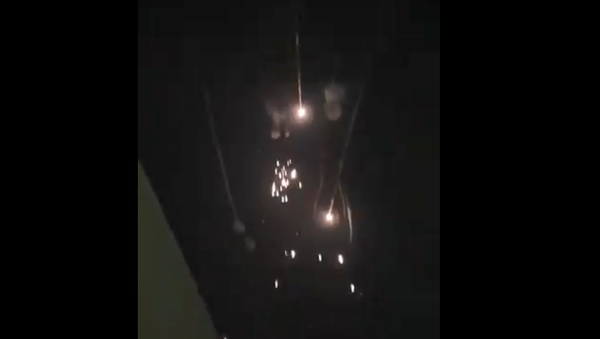 Air raid sirens sounded Friday evening near the Israeli city of Sderot, which sits a short distance from the border with Gaza, according to the Israel Defense Force. Several hours later, the IDF responded with retaliatory strikes in Gaza.

Following two sets of rocket attacks near Sderot that originated in the Gaza Strip, Haaretz has reported that Israeli Prime Minister Benjamin Netanyahu is in contact with the IDF chief of staff and is "instructing the army to respond to the rocket fire with the necessary measures."

Seems like a large barrage towards the college town of Sderot and communities in southern #Israel bordering the northern #GazaStrip. Incoming rocket sirens keep going off pic.twitter.com/9cfbm5GfTa

ELINT reported at least 10 rockets had been fired from Gaza and the the Iron Dome system intercepted eight of them. However, the IDF only reported seven rockets, claiming all had been shot down. One person reported a rocket landed in a field outside Sderot.

​Roughly 42 minutes after sounding the first alarm, the IDF reported a second wave of rockets had been detected, triggering air raid sirens once again. Arutz Sheva confirmed that one rocket struck a house in Sderot without causing injuries.

The IDF tweeted a picture of the damage, which included a broken cornice and some exposed rebar.

This family home in southern Israel was just hit by a rocket fired from Gaza.

So far: 10 rockets have been fired from Gaza at Israeli civilians. 8 of those rockets were intercepted by the Iron Dome System. pic.twitter.com/eTvhuTK2BE

​On Thursday, Israeli fighters shot down an unidentified drone flying over the Gaza Strip, which is autonomously governed by the Palestinian Hamas group. The IDF said that air raid sirens in Beiri and Alumim, several miles south of Sderot, sounded on Thursday as well, and one rocket landed in a field. The AP reported Israeli airstrikes in response hit two Hamas military posts in northern Gaza.

​Video shot inside Gaza captured the roar of Israeli fighter jets and several distinct explosions can be heard.

Bombing is everywhere in Gaza, please pray for our safety! #GazaUnderAttack pic.twitter.com/NmisX8qwCv

Anti-aircraft units in Gaza returned fire at the Israeli aircraft:

Local reports indicate the airstrikes happened near the center of the Gaza Strip.​​