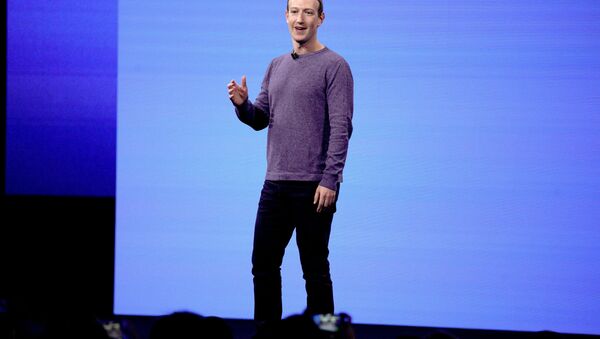 © AP Photo / Tony Avelar
Subscribe
Hardly had the issue of harvesting private data been resolved, when another controversy set in – this time over political ads that Facebook refused to axe, saying users have to decide for themselves.

Facebook’s refusal to follow in Twitter’s footsteps and banish political adverts didn't strike a positive chord with everyone, leading film director Aaron Sorkin to pen a furious op-ed letter to Mark Zuckerberg, blasting him for spreading “lies”. “I admire your deep belief in free speech”, Sorkin started off in the letter published in The New York Times, continuing to address the First Amendment of the US Constitution that guards the exercise of freedom of speech and press.

“I get a lot of use out of the First Amendment. Most important, it’s a bedrock of our democracy and it needs to be kept strong”, Sorkin continued, further referring to political ads as “crazy lies pumped into the water supply":

“But this can’t possibly be the outcome you and I want, to have crazy lies pumped into the water supply that corrupt the most important decisions we make together. Lies that have a very real and incredibly dangerous effect on our elections and our lives and our children’s lives”.

The director then summed up by saying that openness to politicised messages is not about defending free speech, but “assaulting truth”.

In one of his productions, the 2010 film The Social Network, the director zeroed in on the past conflict between Zuckerberg and twins Cameron and Tyler Winklevoss, with the businessmen claiming that he stole the idea for Facebook that earned him billions. It caused Zuckerberg to rave and storm, with the entrepreneur claiming that the film didn’t reflect the situation accurately.

Along with the ongoing controversy over user privacy, following the massive Cambridge Analytica scandal, the social media giant has triggered debate, including a congressional hearing, over it political ad policies.

On 3 October, Facebook’s approach and rules regarding “misinformation" on its platform were quietly revised: previously, all “ads, landing pages, and business practices” were prohibited from sharing “deceptive, false, or misleading content” or making “deceptive claims, offers, or methods”. Now, Facebook only blocks ads that include “claims debunked by third-party fact checkers or, in certain circumstances, claims debunked by organisations with particular expertise”.

"In most cases, in a democracy, I believe people should be able to see for themselves what politicians they may or may not vote for are saying and judge their character for themselves”, Zuckerberg noted in front of a committee. On hearing the words, Aaron Sorkin directed a veiled dig at the Facebook founder, saying that had he known about the businessman's attitude towards fact-checking, he would have “had the Winklevoss twins invent Facebook” in his film.