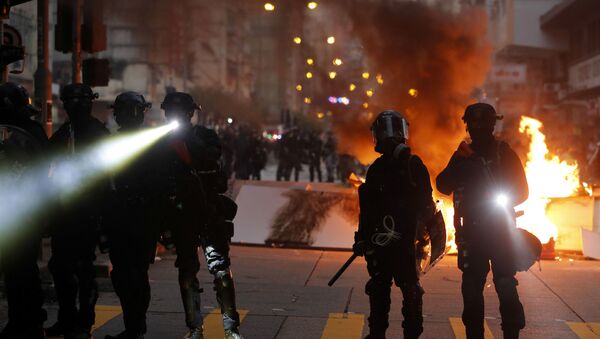 BEIJING (Sputnik) - Hundreds of anti-government protesters used the spooky Halloween night as a pretext to don masks for their routine demonstrations in Hong Kong on Thursday.

Police said they had to fire tear gas at a rowdy crowd in the busy shopping district of Mong Kok, who wore masks in defiance of a city-wide face-covering ban. More party-goers gathered in Lan Kwai Fong entertainment district.

Tensions flared as night fell. Violent protesters started building barricades and setting them ablaze, according to a police statement.

"Rioters built barricades and set them on fire on Dundas Street and Nathan Road in Mong Kok. A fire engine was summoned to the scene but was once obstructed by rioters and could not proceed", it read.

The face mask ban was imposed after months of violent rioting devastated parts of the autonomous Chinese city following an attempt by a local legislature to pass a bill on extradition to the mainland.

Protesters face hefty fines and up to a year in jail for defying the ban. Party-goers used face paint to avoid the penalties, but police were authorities to wash it off if they suspected Halloween celebrations were used as a front.

Over the past few months, Hong Kong descended into chaos as waves of massive rallies against proposed amendments to the city's extradition law hit the global financial hub. The demonstrations often turned violent, with protesters engaging in heavy clashes with the police.

Beijing has repeatedly stated that the situation in Hong Kong was a result of foreign interference in China's domestic affairs and expressed full support for the actions of the local authorities.