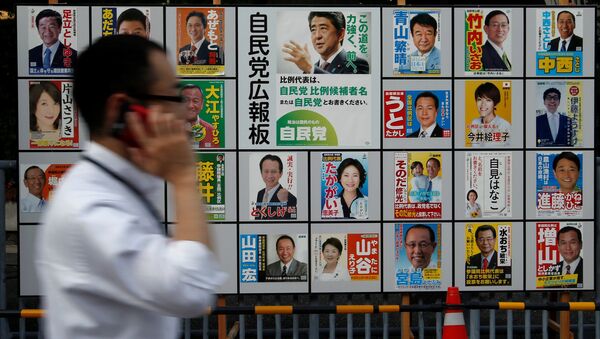 TOKYO (Sputnik) - Japan's Justice Minister Katsuyuki Kawai said on Thursday he had submitted a letter of resignation to Prime Minister Shinzo Abe in the wake of a scandal over alleged election law violations by his wife, becoming the second minister to step down from Abe’s cabinet in a week.

"The public’s trust in the law should not be undermined. I have just submitted a letter of resignation to Prime Minister Shinzo Abe", Kawai told reporters, as quoted by the NHK TV channel.

"I am the person who made this appointment and I feel my responsibility. I am offering my apologies to the Japanese people", Abe pointed out.

The decision followed media reports alleging that the minister’s wife, Anri Kawai, made payments to her campaign team exceeding a legal limit ahead of this year’s upper house elections, in which she ran representing Abe's Liberal Democratic party.

Last week, Isshu Sugawara, Japan’s minister of economy, trade, and industry, resigned in the wake of claims that he had broken electoral laws by offering gifts to voters in his constituency.