Corbyn Takes on Trump, Trying to Get 'His Friend' Boris Johnson Elected 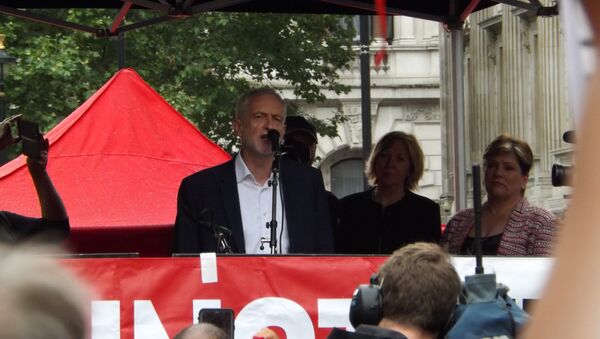 As the UK's general election campaign begins, the country's relationship with the United States post-Brexit will become a major point of discussion among the candidates, with Johnson pivoting towards the US for a trade deal and Corbyn opposing such a move on the grounds that it would lower standards and sell off British services to US corporations.

During an interview with Brexit Party leader Nigel Farage on Britain’s LBC radio on Thursday, US President Donald Trump attacked Labour leader Jeremy Corbyn, saying he would be bad for the UK, while praising Prime Minister Boris Johnson as a "fantastic man who was right for the times".

During the radio interview, Trump praised Johnson for attempting to implement his Brexit deal.

“Yes he has (spoken to me) and he also knows how difficult it is - he’s in a very difficult position. And I think he’s willing to do what no one else would do”, the US leader said.

“He’s a fantastic man and I think he’s the exact right guy for the times. And I know that you (Farage) and him will end up doing something that could be terrific. If you and he get together it’s, you know, an unstoppable force.”

However, Trump also criticised Johnson's current withdrawal agreement which the PM is seeking to implement.

“Under certain ways we would be precluded, which would be ridiculous.”

​The comments by the US president come as the Labour Party officially launched its campaign for the 12 December 2019 general election, where Corbyn made a direct attack on the US president and the current British government's relationship with him.

“Trump is trying to interfere in UK election to get his friend Boris Johnson elected”, he said on Twitter.

Donald Trump is trying to interfere in Britain’s election to get his friend Boris Johnson elected.

It was Trump who said in June the NHS is “on the table”. And he knows if Labour wins US corporations won’t get their hands on it.

Our NHS is not for sale.pic.twitter.com/AUhht3pCgL

​Trump also said that the UK would be able to do "four to five times more trade with the United States" post-Brexit, as current arrangements prevent the UK from doing trade agreements with the US due to it's EU membership.

​Johnson called the general election in the hope that it can break the Brexit deadlock after parliament blocked his attempts of pushing through his deal and removing the possibility of no deal from the table.

The concept of the UK establishing a new trade agreement with the US has caused much controversy, however, due to the lower standards and regulations on US products compared to the EU.

A vociferous opposition has been made, specifically towards US standards on food, citing chlorinated chicken and the amount of maggots permitted in certain US food stuffs which are not allowed in the EU.

Jeremy Corbyn has in the past specifically opposed what he calls a "sweetheart deal" with Trump, where the Conservative government would lower standards and labour protection laws in order to permit US companies from doing business with the UK.

Labour will not allow Donald Trump to get his hands on our NHS. #WinWithLabour pic.twitter.com/DHnjI6bvg6

​This comes as the UK's health secretary Matt Hancock met with representatives from US companies in secret meetings to discuss the NHS in post-Brexit trade negotiations, as reported by the independent.

Despite promises by the government that the NHS is not for sale to US companies, fears about purchasing drugs from the US at prices set by its private healthcare system persist, with a third of people saying they are "concerned" about the future of the NHS in any deal with Washington, as reported by ITV.

The US has previously made comments against Corbyn, with US secretary of state Mike Pompeo saying that if a Corbyn government were to materialise, the US would "push back" against it.