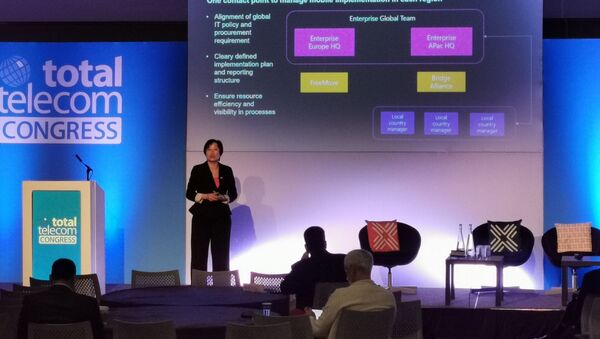 Demond Cureton
All materialsWrite to the author
The push for 5G technologies requires a visionary approach as the industry rapidly evolves, causing telecoms to face disruptions to their established biases on how best to apply the budding technology.

Bridge Alliance CEO, Mrs Geok Chwee Ong, discussed at the Total Telecoms Congress 2019 in London on Wednesday about how companies were weighing in on their 5G rollouts, and why her company's collaboration platform was instrumental in helping telcos coordinate to build the world's next-generation communication infrastructures.

Mrs Geok explained the complexities of the telecom industry and its numerous developmental ‘silos’, as well as how her company was founded to help businesses collaborate on the same platform.

Telecos have come together because they “see the need” to do so, as the speed of the industry was changing rapidly, creating an impetus to forge strategic alliances, she noted.

She said: “Imagine having a car manufacturer ship a car to a different part of Asia. It would be a nightmare if they had to go to there and negotiate a commercial deal while managing the connections in each of these countries.

The “fragmentation” in Asian markets created major differences between telcoms in the region, she added. Bridge Alliance’s purpose was to create a single platform to serve the needs of multinational corporations as they integrated their platforms globally.

5G development was also at “varying stages”, she said, adding South Korea, namely Korea Telecom (KT) was one of the most advanced countries in 5G technologies.

Korea’s SK Telecom, alongside the South Korean government, were playing a key part in building the country’s 5G sector, with plans to capture 15 percent of global economic value in 5G by 2026, Mrs Geok said citing officials in Seoul.

5G created a new ecosystem, even “on the hardware side”, Mrs Geok said, due to the “different ways that 5G can be used” in places such as Australia and the Philippines, where the technologies were being integrated in fixed wireless systems (FWA) to boost mobile coverage.

Factors such as worker readiness, regulations, infrastructure and government policy, among others, affected the rate of 5G development per country, but the speed at which the technologies were evolving were equally creating new possibilities, she added.

“I truly believe that we’re going into the Fourth Industrial Revolution,” Mrs Geok said. “It is an era where a lot of possibilities could happen”.

Common goals shared amongst telecoms were reshaping the industry, with Japanese holding multinational Softbank, a Bridge Alliance member, focussing its strategy by investing in new 5G technologies and exploring the Internet-of-things, a “key broad engine of telecoms”, she said.

She added: “It’s a story of industry transformation. It’s much less about 5G. 5G is a component and an important [ingredient], but it’s not just 5G alone.

Softbank also launched the ‘Cruise’ joint venture with General Motors to build autonomous vehicles, which moved “beyond 5G technology” and into mapping services, among others disruptive sectors, with customer input becoming a crucial factor in developing 5G services, she said.

At an annual Bridge Alliance event in Singapore involving 34 operators collaborating on 5G, companies such as Swedish commercial vehicles manufacturer Scania were invited to provide feedback on how to develop various 5G systems, including autonomous guided vehicles (AGVs).

Other applications for 5G, due to its low latency, included allowing sports and K-Pop fans to have “indirect experiences” of subjects using multiple viewpoints, including concert and backstage views.

She said: “For the whole industry to transform, it takes years. But we have to start now, because there are a lot things to learn. Some are the pinpoints our customers are trying to solve. Others are the missing components we need to bring into the ecosystem, so we need to collaborate tightly.

“It will take another 10 years before we see truly meaningful autonomous industry”, she said.