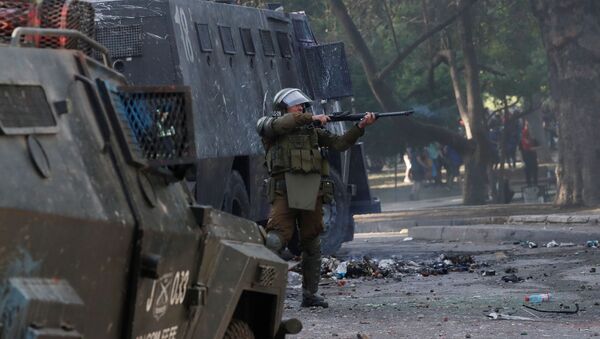 © REUTERS / HENRY ROMERO
Subscribe
Media coverage of the protest movements in Hong Kong and Chile contrasts sharply, tracing a line in US foreign policy that aims to buttress movements that benefit US imperialism while ignoring or demonizing those that challenge it. In several key ways, this dichotomy is apparent and palpable.

On both sides of the Pacific, sustained civil resistance is rocking governments to their core. In Hong Kong, anger at a proposed extradition bill with mainland China erupted into huge demonstrations in June; in mid-October, anger at a subway fare hike in Chile provoked mass disobedience, snowballing into enormous anti-austerity protests amid government intransigence and police repression.

However, while the epic scope of the two movements might have been expected to invite similar coverage by the US corporate media, the opposite has been the case: Hong Kong protesters have been awash in US airtime and media reports, while Chilean protesters have effectively seen a blackout by US media, with just a trickle of real information getting through.

Moreover, the two movements contrast hugely in ways that bring the media’s bias into full view.

In Hong Kong, no protesters have been killed since the demonstrations began five months ago, although several people have died in suicides ostensibly indirectly linked to the protests. One apparent suicide, caused by falling from a scaffold, attracted no shortage of melodrama in the media. As of October 25, more than 2,600 have been arrested, according to the Washington Post.

By contrast, since demonstrations in Chile began on October 11, at least 20 people have been killed, five of them directly by police, and more than 5,400 have been arrested. In one notable incident in the Chilean National Congress on October 23, Deputy Pamela Jiles presented then-Interior Minister Andrés Chadwick with names and photos of several of the dead and injured protesters, only to be challenged by other representatives, who tore up the papers as Chadwick looked on, smiling, giving something of a sense of the government’s reaction to the violence.

NPR did a short piece about protester disappearances at the hands of police - or at least seemed to. The bulk of the article focuses on those that happened 40 years ago under dictator Augusto Pinochet and not on those happening this month. Meanwhile, reports of arbitrary arrests and disappearances abound in Chile.

There’s been no shortage of videos and headlines about the deployment of tear gas by Hong Kong police, or the use of blue dye sprayed from fire hoses to make protesters identifiable. Rightly so, since the use of tear gas is considered to be a war crime by the Chemical Weapons Convention of 1993, albeit not against civilians.

However, the incidents that have attracted the most attention are two cases in which Hong Kong police brandished firearms: one on August 25 when an officer pointed his pistol at protesters, seen below, and another on October 1, when an officer fired his pistol into a protester’s shoulder at point-blank range.

​Important to note here is the lack of context given for the gun draws: with several protesters chasing the officers with weapons immediately prior to the incidents, suffice that it’s easily imaginable that their mortal fear was somewhat legitimate. Western media was peppered with short videos showing just the gun being drawn or fired, and rarely, if ever, the 30 seconds leading up to it.

Coverage of police violence in Chile has been limited mostly to passing mentions - again, mostly the deployment of tear gas, which always makes for dramatic photos. However, widely ignored is the utterly brutal response by police, as well as the 20,000 Chilean soldiers in the streets, complete with armored vehicles.

A survey of stories written by journalists at the Wall Street Journal, New York Times and Washington Post shows repeated references to “mob violence,” “violent clashes” that simply erupt and have no actors (or actors on both sides at equal fault) and “escalating violence,” again deploying an adjective in place of a verb - the violence is apparently self-escalating, and not escalated by anyone.

​Numerous articles also contain quotations from Chilean President Sebastián Piñera’s infamous speech on October 20 in which, channelling Pinochet, he declared, “We are at war against a powerful, relentless enemy, who doesn’t respect anyone, who is willing to use violence without any limits, even if it means the loss of human life … We have seen the capacity of destruction of these vandals, these people who represent evil.”

The statement prompted protesters to adopt “no estamos en guerra” (we are not at war) as one of their slogans, painted on huge Chilean flags and projected onto the sides of buildings.

There is also no mention of the extensive use of live ammunition as well as rubber bullets by police, despite being well-documented by those on the ground.

City-wide property damage caused by the Hong Kong protests is at present impossible to calculate, and nobody has tried to do so. However, the South China Morning Post noted on Monday, “Insurance claims related to arson, vandalism and loss of business due to anti-government protests may have reached nearly HK$600 million (US$76.5 million),” the city’s third-highest total in history for one cause.

That destruction, however, never finds its way into Western media, even though it’s extensive and has, at times, included the torching of police stations and destruction of government buildings. The wreck made of the city’s Legislative Council when protesters stormed it on July 1 brought by itself a $5 million repair bill, and the repairs to the Mass Transit Railway service could top HK$100 million ($12.7 million).

​Chile’s vandalism hasn’t been small. The Enel Chile power company’s building in downtown Santiago burned in dramatic fashion after protesters torched it, and other structures such as shops, subway ticket stations and a subway train have also been burned, some of which resulted in deaths. Reuters noted the subway system had suffered a catastrophic $400 million in damage.

However, for weeks these were essentially the only images that appeared in US media of the Chilean protests - a consequence mostly of them being completely ignored aside from the most click-grabbing images. Few images showed, for example, the size of the crowds gathered, or other aspects of the protests such as civil disobedience or even the placards brought by attendees.

The media’s approach to the two movements might be summarized thusly: in neither Hong Kong nor Chile have government concessions and partial meeting of their demands been successful at quelling the protests. However, in Hong Kong this intransigence is seen as correct, while in Chile it’s seen as incorrect.

Here are two examples from CNN and Reuters. When Hong Kong Chief Executive Carrie Lam announced the extradition treaty was “dead” on July 8, CNN reported the move as an “attempt to outflank the protest movement,” noting it might be “too little, too late.” This creates rhetorical room for the protesters to continue their resistance, suggesting they’re justified in refusing to compromise or go home at this point.

Reuters, likewise, noted that “critics [remain] unconvinced” by Lam’s move, citing a bevy of figures calling for the executive to fully meet the protester’s demands.

However, while on Monday Reuters noted protests following Piñera’s concessions showed the measures “continued to fall short,” the story’s headline, lead and general focus zero in on the “damage” caused by the protests, including how tired some people are of the vandalism. CNN, likewise, noted protesters were out in the streets “despite the [cabinet] reshuffle” and promised reforms, again focusing on the “violent street battles.” The general attitude of both pieces is that the Chile protests are getting stale and losing focus, now that some of the demands have been promised.

In the Service of Empire

The brutality of repression in Chile hasn’t escaped the attention of human rights organizations. Amnesty International promises an upcoming report, and the United Nations High Commission on Human Rights (UNHCR) said it was dispatching a team to the South American country. UNHCR’s chief, Michelle Bachelet, was criticized by protesters just days earlier for her silence on the repression - perhaps her hesitation stems from being a former Chilean president herself, and thus partially culpable in the protesters’ minds for the neoliberal social service cuts they’re now demanding a stop to.

In all, the US media has taken its cues on the two protest movements from the US State Department: in Hong Kong, the protesters, funded by the National Endowment for Democracy and other regime change-minded NGOs, play a major role in continuing the US policy of demonizing China and destabilizing nations that challenge US hegemony. In Chile, protesters are finally rejecting neoliberal austerity imposed for nearly half a century by one of the more notoriously brutal manifestations of that hegemony. It’s no surprise they wouldn’t appear in the same light.

000000
Popular comments
Wait for another decade and the US of Na MSM won't matter much.