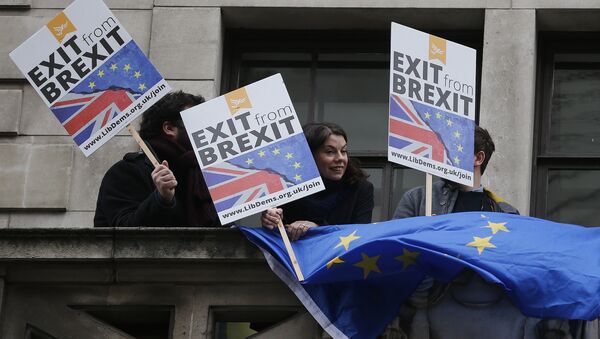 While the British government has managed to push a 12 December snap election through the House of Commons that is supposed to take it one step closer to approving the current prime minister’s UK-EU divorce agreement, the country’s oldest economic think tank has cast a long shadow with its growth prognosis.

Leaving the EU under the terms of Prime Minister Boris Johnson’s deal would cost the UK economy about $90 billion, the National Institute of Economic and Social Research (NIESR) warned. One of the UK’s leading economic think tanks, as The Guardian calls it, has suggested that by the end of the 2020s, Johnson’s agreement, if accepted, would axe the size of the country’s economy up to 4%, or about $1,400 per capita a year.

Moreover, the organisation predicts that it will be even smaller than it would have been under Johnson’s predecessor Theresa May with her variant of the deal. That would have shaved 3% off the economy. However, as NIESR claims, all options would have a worse impact over a decade than remaining in the bloc.

As NIESR points out, this plan will not bring a “deal dividend”, lifting the uncertainties, arguing that the outcome of Johnson’s deal and the proposed free-trade agreement would be a smaller economy than if the UK remained in the EU or received an extension.

According to his organisation, the fears of a no-deal Brexit and the related uncertainty over EU-UK trade have already slowed down economic growth and resulted in a 2.5% smaller economy in comparison to what was expected if Britain had voted against leaving the bloc in 2016.

“The UK economy will continue to suffer what we’re terming a slow puncture. Not a pop, not a bang. But a slow puncture, as investment is deferred in the face of uncertainty”, director of NIESR Jagjit Chadha said.

NIESR, however, admits that Parliament’s supporting the deal would ease some of the uncertainty and encourage business investment in the UK. But it still insists that higher trade barriers, shrinking migration and weaker growth in labour productivity, which Johnson’s deal is expected to result in compared to the current situation, would make for a smaller economy.

At the same time, new free-trade deals with other countries are said to be insufficient to make up for the impact of Brexit. Additionally, the think tank raises doubts that Johnson’s government would manage to agree to a free-trade deal with the EU by the start of 2021, which would mean crashing out of the EU.

The prognosis comes hot on the heels of the UK Parliament's House of Commons approving a snap general election on 12 December. The bill is now set to go before the House of Lords. The dissolution date for the UK Parliament is set for next Wednesday, 6 November.

Johnson pushed an early vote in a bid to break the deadlock over his proposed terms for withdrawing from the EU, which has been in limbo since last week. According to the UK PM, after the election, a new parliament and government will be able to ratify the deal. This could mark an exit from the political turmoil that the UK has lived with since the Brexit referendum in June 2016.