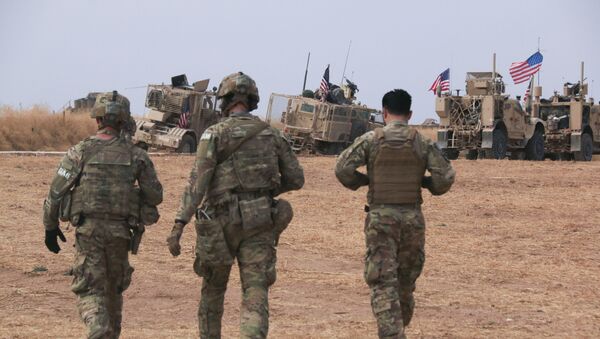 © AP Photo / Baderkhan Ahmad
Subscribe
The United States announced on Monday that the remains of Daesh* leader Abu Bakr al-Baghdadi - killed in a US special operation in Syria’s Idlib province - have been buried at sea. Authorities didn’t reveal any details about where and when the burial took place.

US Defence Secretary Mark Esper and chairman of the Joint Chiefs of Staff Mark Milley confirmed the news.

“The disposal of his remains has been done and is complete and was handled appropriately”, Milley told reporters at a Pentagon briefing.

US President Donald Trump informed the world on Sunday that al-Baghdadi detonated his suicide vest as US forces closed in on him in the tunnel he was hiding in, killing himself and three of his children. His body was mutilated in the blast, and the tunnel caved in on him. Nevertheless, his identity was confirmed on the spot, using facial-recognition technology and fast DNA analysis, Trump told reporters.

The Kurdish led-SDF (Syrian Democratic Forces) senior advisor Polat Can, said on Twitter, that it was thanks to their intelligence work that the identity of al-Baghdadi was confirmed before the US special operation.

3 - Our own source, who had been able to reach Al Baghdadi, brought Al Baghdadi’s underwear to conduct a DNA test and make sure (100%) that the person in question was Al Baghdadi himself.

​Despite the abundance of information coming in from the US and Trump himself, the United Nations said it could not verify its credibility.

"We've taken note of the announcement by the President of the United States on the death of Abu Bakr al‑Baghdadi, the leader of the UN‑designated terrorist group Daesh", UN spokesperson Farhan Haq said in a press briefing on Monday.

However, the UN "cannot personally verify the accuracy of this. We trust the reliability of the various sources of information that have been speaking up, but, obviously, any sort of information would need to be verified by the various authorities on the ground", the spokesman added.

Cahit Armagan Dilek, a former staff officer in the Turkish military and director of the Ankara-based 21st Century Turkey Institute, said that while Trump gave a lot of details of the operation, there's still no "concrete proof, video or photo" that the Daesh leader is now dead:

"If they couldn't film Baghdadi alive in tunnels and just before he detonated his attack vest, no other film and photos will be reliable proof", he stressed.

"Other than this, Trump spoke out in far too much detail. And we, even US authorities, don't know what is correct. US authorities may have a hard time putting all of Trump's statements into a sound scenario and proving it", the Turkish expert said.

Jo Jakobsen, Professor of political science and international relations at the Norwegian University of Science and Technology, in his turn believes that while "details coming from the US, and from some other parties, like the SDF and the Iraqis, add to the credibility of his death", the lack of video proof is strange.

The video of Saturday's raid against al-Baghdadi is also classified, but US President Donald Trump says he's "thinking about" releasing parts of it.

"The controversial thing is really the footage – or the lack of the publication of the footage", Jakobsen noted.

Adding that at the same time it is "relatively understandable that the US hesitates to release any video or pictures, given that this was a special operation involving a lot of human and material resources and, as such, is classified".

"However, there is a strong reason to suspect that the US hesitates insofar as there is a mismatch between what actually happened and the contents of President Trump's speech", the Professor pointed out.

Trump said that watching the raid was like a movie, from the White House Situation Room, but not all the details he revealed seem to be true.

"Already, there are indications that, contrary to what Trump indicated, the recordings of the operation were devoid of any audio. This conflicts with Trump's graphic account of al-Baghdadi screaming and crying and dying like a coward", Jakobsen noted.

"Other parts of Trump's 50-minutes press session were, we know, filled with some lies and some, well "spinning" of the truth. If the footage were to reveal that Trump's account of al-Baghdadi's death was also a lie or spinning of the truth, this would be highly embarrassing to the whole administration. This would also give the remaining IS [Daesh] members, fighters and leaders a boost of morale, insofar as it would show that al-Baghdadi did not die crying like a coward. But most of this is at the level of speculation", the Norwegian scholar explained.

Russia has also questioned the 'contradictory details' of the US operation, with the Ministry of Defence, saying that it has reasons to doubt it ever took place, more so that such a mission was successful.

000000
Popular comments
The old Soviet Union would have been impressed with US propaganda, second to none. I recall hearing a story of an American asking a Czech what they thought when they were listening to propaganda, the Czech replied that they didn't believe it unlike the Americans that believe the US government propaganda.
Foxylady
30 October 2019, 18:28 GMT3
000000
As usual "it's true because we say so, ...no actual evidence necessary". How honest has the US been in the past? Maybe the people of Iraq will be kind enough to tell us where they hid all of those "weapons of mass destruction" they supposedly had? Hadn't Colin Powell a little glass vial with white powder in it? What about those "gas attacks" in Syria that resulted in countless missiles being lobbed at that country and its people with not one shred of evidence offered? As for Baghdadi, I have my doubts based on past experience but we will have to wait and see if he is truly dead, if he maybe pops up causing trouble for Washingtons enemies somewhere else or if he is now got a new name and a nice house somewhere safe. Time will tell...