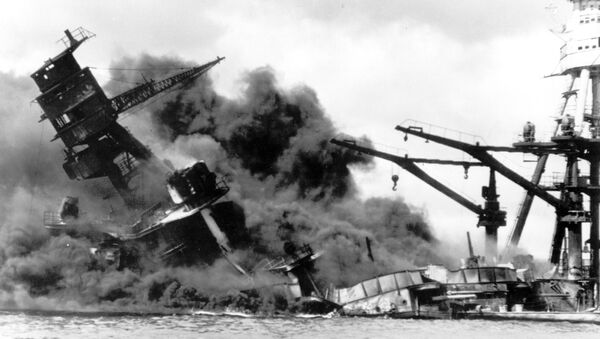 © AP Photo
Subscribe
International
India
Africa
The ship was discovered in May, but images of the vessel were only published this October – 75 years after the fatal incident during the Battle of Leyte Gulf between the US and Japan.

A deep-sea expedition exploring the Pacific Ocean found remains of the USS St. Lo – an American escort carrier and the first ship to be completely destroyed by Japanese Kamikaze planes during World War II.

The main part of the wreckage is located upright in 4,736 meters (15,538 feet) of water, on the edge of the Philippine Trench.

​St. Lo was attacked by a kamikaze plane near the Philippines in 1944. The suicide attack managed to detonate torpedo and bomb magazines on the ship, killing 143 people on board, and subsequently sinking the ship.

The carrier became the first major warship sunk by kamikaze attack, exploding and burning and sinking after half an hour. 143 US sailors were killed. The R/V #PETREL discovered ST LO's wreck earlier this year, yielding more amazing imagery. https://t.co/oQvTvQfytk pic.twitter.com/E8cOhqlpQe