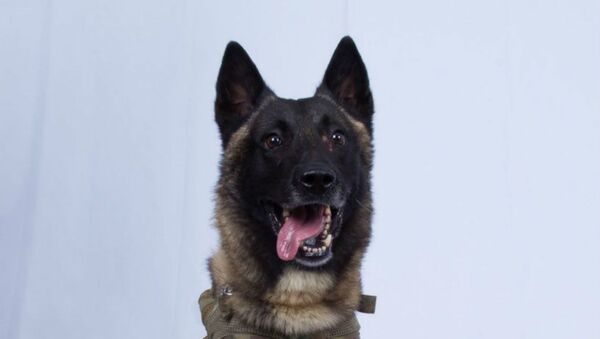 US President Donald Trump on Wednesday tweeted a doctored image of himself giving the dog that was injured in the US military operation that killed Daesh leader Abu Bakr al-Baghdadi a medal for its service.

"AMERICAN HERO!" reads the photo’s caption. The image appears to be based off of an Associated Press photo of Trump awarding the Medal of Honor - the most prestigious military award used to recognize acts of valor by US military service members - to Vietnam War veteran James McCloughan in 2017.

​Trump’s tweet generated thousands of comments and retweets, with many users criticizing him for photoshopping the image in the digital age where photos and videos can be easily fabricated to “spread misinformation.” Another user joked that Trump had to edit the photo because the dog would bite him if he tried to actually give it an award. And of course, there was a slew of memes and Twitter users’ own creative renditions of the photo.

​Trump’s latest tweet comes after he released a photo of the dog on Monday, with the caption that the animal did “such a GREAT JOB” on the Baghdadi raid. The identity of the dog has not been revealed.

Trump confirmed at a Sunday news conference that Baghdadi died following a K-9 chase through an underground tunnel, where the Daesh leader ended up detonating his own suicide vest, killing himself and two of his young children he’d taken with him.

“We are not releasing the name of the dog right now,” Chairman of the Joint Chiefs of Staff Gen. Mark A. Milley told reporters at a Monday briefing, CNBC reported. “We’re protecting his identity.”

During a Pentagon briefing Wednesday, officials confirmed that the dog suffered minor injuries from electrical cables in the tunnel that became exposed after Baghdadi’s suicide vest detonated. In addition, they noted that the canine military member has served for four years, completed 50 combat missions and has already returned to duty.

This is not the first time that dogs have been part of special military operations against terrorists. In 2011, a Belgian Malinois named Cairo helped Navy SEALs in tracking down al-Qaeda leader Osama bin Laden and was given the “Animal of the Year” award by Time magazine the same year.