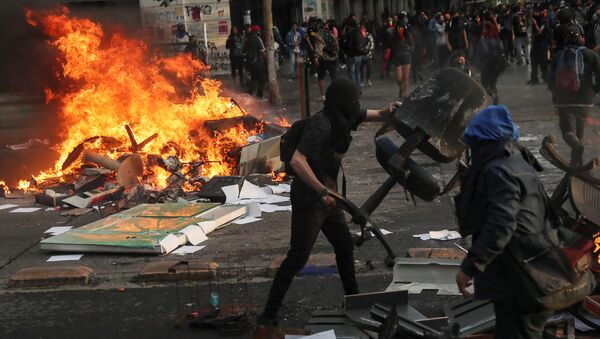 Tim Korso
All materials
Anti-government protests have been rocking Chile for over a week, resulting in a temporary curfew being imposed in the country's capital Santiago that was lifted only recently.

Chilean President Sebastian Pinera has announced that the Asia-Pacific Economic Cooperation (APEC) summit and the UN Climate Change Conference (Cop25), which were to take place in the country this year, are cancelled. He linked his decision to the complex socio-political situation in the country.

"This is a very difficult decision, as we understand the importance of holding APEC and COP," Pinera said in a televised statement.

Pinera's decision took the White House "by surprise", Reuters reported, citing an official. It was expected that US President Donald Trump and his Chinese counterpart Xi Jinping would sign the so called "Phase 1" agreement on bilateral trade at the summit, seeking to gradually end the two countries’ ongoing trade war.

Violent protests erupted in Chile following a decision by authorities to increase subway fares. Some of the rallies resulted in clashes with police. At least 19 people were killed during the unrest.

In light of the clashes, the country's military imposed a curfew in the capital Santiago, while the government declared a state of emergency. The curfew was eventually lifted on 26 October.