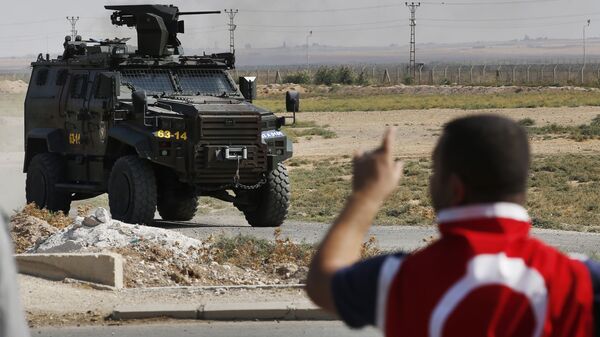 "Turkish-Russian joint patrols will be initiated in the west and east of the borders of current Operation Peace Spring at a depth of 10 kilometers [6.2 miles], except for the city of Qamishli. In this regard, mine and HME [homemade explosives] cleansing activities, as well as reconnaissance flights, have been started on patrol routes", the ministry said in a statement published on late Tuesday.

On 22 October, Russia and Turkey signed a 10-point memorandum of understanding that stipulates that units of Russian military police and Syrian border guard be deployed to the Syrian-Turkish border amid Ankara's operation against the Kurdish units in the area. The Turkish offensive aims to clear the area of Daesh* and Kurdish militants, which Turkey designated terrorists, and create a safe zone there for the further accommodation of Syrian refugees currently residing in Turkey.

Under the memorandum, the Russian and Syrian forces are also supposed to facilitate the withdrawal of the Kurdish troops and their weapons from the 30 kilometer [18-mile] safe zone within 150 hours.

On Sunday, the Kurdish-led Syrian Democratic Forces (SDF) announced the complete withdrawal of troops from the border area in accordance with the memorandum.