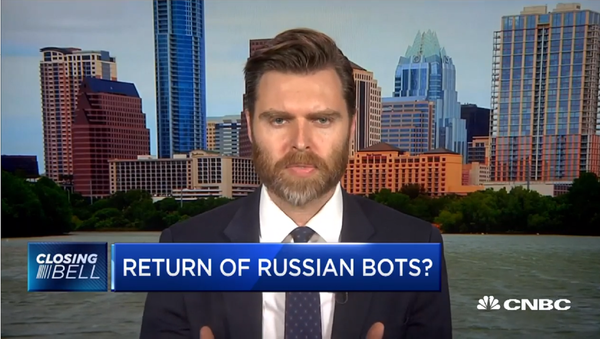 © CNBC
Subscribe
International
India
Africa
Kit Klarenberg
All materials
Controversial “information integrity” firm New Knowledge, which produced a report commissioned and endorsed by the US Senate on the activities of the Internet Research Agency before, during and after the 2016 Presidential election, has rebranded as Yonder.

In a somewhat perplexing statement on its website, the company’s cofounder Jonathon Morgan – a US national security establishment veteran – outlines the rationale behind the change.

Noting “people are bonded by things they oppose or dislike, but also by things they love”, he states while previously the company “focused solely on negative attention”, it’s since expanded its purview to “create the needed familiarity with both adversaries and allies”.

“Articulating what we stand for requires we know which of these groups to engage with and how. The internet has given us the luxury of making values-based decisions. Consequently, we’re all under new pressure to be clear about what we stand for... Ensuring values connect authentically with customers, and learning which factions of online culture are responding most strongly to those values, either in a positive or negative way, has become critical... We believe an authentic, contextualized online culture leads to a responsible and receptive global community and our mission is to give the online world the same amount of cultural context as the offline world,” Morgan rambles.

Ironically they did that two days after I trolled them in a tweet with Elizabeth Warren, I then went to look for them and they had changed their name. After I tweeted about yonderai they blocked me😏 https://t.co/rQiK7m3vit

​As a result, the name New Knowledge no longer fits the company’s “expanded mission or culture”, so a name reflecting the “joyful, optimistic, approachable, and most of all, authentic” culture of the firm – which is also “fun to say, hear and read” – was chosen instead.

“Yonder alludes to all of the new opportunities we can guide our clients toward, speaks to adventurous businesses ready to embrace new customers, new narratives, and a changing landscape, and also represents the future, but not the unattainable, full of sprawling horizons and fresh discoveries,” Morgan concludes.

Readers could very much be forgiven for failing to catch Morgan’s meaning, but for anyone in the dark, tech website Austin Inno offered some clarity - the company has expanded its client base beyond government to “household consumer brands”, helping them “spot authentic consumer factions that often drive conservations about brands and industries”, in the process assisting them in understanding their customers better to improve their marketing strategies.

The name Yonder was said to have been chosen following a survey of the firm’s 60-strong staff, “to get a sense of what the company’s mission means to them”, with feedback “[amounting] to an optimistic vision for the future of the internet — looking over the horizon and helping usher in an era where fake news, bots and other web wreckage isn’t so easily blended with real human insights and interactions”.

Such sentiments are highly ironic given the company has been responsible for much “web wreckage” over the course of its four-year existence, activities that sparked significant outcry and had a massively deleterious impact on its credibility – which may be the real motivation behind the updated moniker.

So you didn't watch the Jimmy Dore or wasn't it in it?
" cybersecurity firm New Knowledge" owner was banned from Facebook for creating fake Russian bots in order to make it look that Roy Moore in the Alabama election was supported by the Russians. You read propaganda.

​By the firm’s own admission, it "orchestrated an elaborate 'false flag' operation” to damage former state supreme court judge Roy Moore’s 2017 Alabama Senate campaign – under its auspices, New Knowledge planted the idea Moore's campaign was being amplified online “by a Russian botnet, and sought to perpetuate sexual assault allegations against Moore to "enrage and energize Democrats" and "depress turnout" among Republicans.

It also created a Facebook page appealing to conservative Alabamians, encouraging them to endorse obscure candidate Mac Watson instead of Moore, and going to the extent of contacting Watson directly via the bogus page, stating they would endorse him and asking whether he trusted anyone "to set up a super PAC that could receive funding".

They also covertly offered advice on "how to sharpen [Watson’s] appeal to disenchanted Republican voters", and arranged interviews for him with The Montgomery Advertiser and Washington Post. Simultaneously, Watson's Twitter following leaped from 100 to over 10,000.

Many of those new followers were undoubtedly bots and almost certainly created by New Knowledge – but simultaneously, the firm flooded the US media with allegations that thousands of Moore's Twitter followers were Russian bots. Local paper Montgomery Observer was first to regurgitate the claims, publishing an article in October 2017 - Russian invasion? Roy Moore sees spike in Twitter followers from land of Putin - which was duly picked up by many other outlets, including Mother Jones.

The organisation's report - Russian Propagandists Are Pushing for Roy Moore to Win - offered no evidence to support its headline beyond the findings of the Hamilton 68 dashboard. Launched by NATO and USAID-connected 'think tank' Alliance for Securing Democracy, the dashboard allegedly tracks in real-time 600 Twitter social media accounts "linked to Russian influence" – amazingly, it was developed by none other than Jonathon Morgan, although when asked what techniques Hamilton 68 employs to identify online "Kremlin influence" operations, his response was somewhat lacking.

"We developed techniques for determining who matters in a conversation. Using some of those techniques, we've identified a subset of accounts we're very confident are core to furthering the Russian narrative in response to mainstream events," he unconvincingly equivocated.

When the iniquitous ruse was publicly exposed in December 2018, New Knowledge claimed it had merely been an ‘experiment’ to better understand online disinformation - few were convinced by the explanation though, with Alabama Senator Doug Jones being so “outraged” as to call for a fully-fledged federal investigation into the firm’s conduct.

“What’s obvious now is we’ve focused so much on Russia that we haven’t focused on the fact people in this country could take the same playbook and do the same damn thing. I’d like to see the [Federal Election Commission] and Justice Department look at this and see if any laws are being violated or were violated, and if there were, go after them. I’m concerned it’s going to happen again to me, my opponent, my colleagues up here, the people in the House, the president, the people who are going to run against the president. This shouldn’t happen to anyone in this country. We’ve got to take steps to protect our electoral system,” he fulminated to Politico.

New Knowledge changed its name to @yonderai a few days ago, they’re still under FEC investigation which is pending a 4th commissioner to be appointed by Trump. https://t.co/rQiK7m3vit

​In any event, if the effort was conducted for academic purposes, it appears no concrete learnings arose from it. The same month New Knowledge’s shady dealings were revealed, cofounder Ryan Fox – like Morgan a US national security veteran – made headlines after claiming he’d identified a vast number of prominent Kremlin-controlled social media accounts pumping out pro-Gilets Jaunes content.

However, the few mainstream media outlets that asked for supporting evidence were left wanting – Fox told Wall Street Journal he merely "believed" Russia was interfering in the protests, and Wired "there’s no way to know for sure who is behind a particular influence network on a social media platform".

Nonetheless, New Knowledge has performed a valuable service to the cause of truth – for its Senate-backed report, The Tactics and Tropes of the Internet Research Agency, unintentionally offered conclusive proof Russian social media activity played no role whatsoever in the outcome of the 2016 Presidential election.

Most significantly, it noted evaluating IRA content “purely based on whether it definitively swung the election” was “too narrow” a research focus as “explicitly political content was a small percentage” of the IRA’s online output, amounting to a mere 11 percent of the total content attributed to the Agency, and 33 percent of user engagement with that content.

Some points to stress: 1) it's tough to suggest that Russian clickbait helped decide the 2016 election when even the Senate authors acknowledge that just "11% of the total content" from Russian trolls "was related to the election", & their posts "minimally about the candidates." pic.twitter.com/MIzCi0a6TC

​The IRA’s posts were moreover found to be “minimally about the candidates” with “roughly 6 percent of tweets, 18 percent of Instagram posts, and 7 percent of Facebook posts” mentioning Donald Trump or Hillary Clinton by name.

Furthermore though, the report also starkly highlighted just how paranoid, fantastical and desperate advocates of the Russian interference narrative can be, often in extremely comical ways.

For instance, in a section titled ‘Asset Development’, the authors stated the IRA engaged in “human asset recruitment” tactics, which were “expansive, and clearly a priority”.

“Recruiting an asset by exploiting a personal vulnerability – usually a secret that would inspire shame or cause personal or financial harm if exposed – is a timeless espionage practice. So is the tactic of infiltrating protest movements. The IRA attempted both, even going so far as to create help hotlines for people struggling with sexual behavior, creating an opportunity to blackmail or manipulate these individuals in the future,” the report alleged.

What else is to be expected from the company which claimed in a report (commissioned and endorsed by the US Senate) the Facebook posts below were attempts by the Internet Research Agency to infiltrate protest movements and recruit 'assets'? pic.twitter.com/y1aEEakuFv

​Examples offered of this alleged strategy in action were unconvincing and humorous in equally extreme measure. “Requests for contact with preachers from black churches”, “offers of free counseling to people with sexual addiction”, “requests for photographers to document protests”, “job offers for designers to help design fliers” and “requests for female followers to send photos for a calendar” were all said to be attempts to enlist potential agents – but even more amusing were IRA-funded Facebook ads illustrating the phenomenon.

The suggestion the Kremlin sought to ensnare serial onanists as spies is far from the only claim in the report to stretch credibility to absolute breaking point - although ever since, Western journalists and politicians have invoked the document as evidence almost everything digital, from popular gaming app Pokemon Go to LGBT-positive sex toys, has been nefariously weaponised by the Kremlin, African-Americans were deterred from voting as a result of Russian influence, and US Green party politician Jill Stein is an agent of Moscow, among a great many other self-evidently ludicrous contentions.