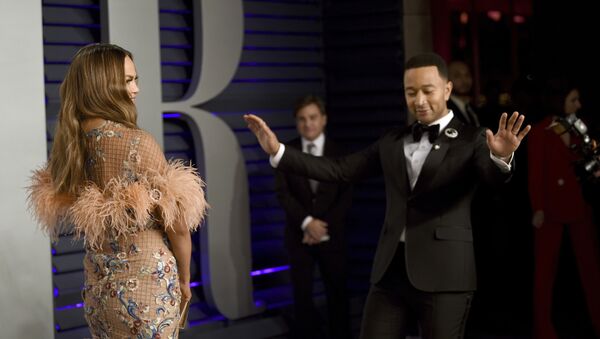 In September, American singer John Legend and Donald Trump engaged in a heated exchange of tweets, with the US president slamming the musician and his “filthy mouthed” model wife Chrissy Teigen for taking credit for the new criminal justice reforms.

American musician John Legend and his TV star wife Chrissy Teigen have revealed their 2020 presidential pick during an interview with Vanity Fair – and unsurprisingly it is not Donald Trump.

“My favourite — I’m going to say it, we’ll break news today — is Elizabeth Warren", soul singer Legend said in Vanity Fair's December issue, which is already available on the website.

“She’s the best candidate running today, and she comes at it with joy and with sincerity and with a wealth of knowledge and experience”.

Legend’s supermodel wife Chrissy Teigen, who has been an outspoken social media critic of US President Donald Trump, up to the point where he blocked her from his Twitter account two years ago, also shared her favourite presidential candidates.

The couple also did not miss the opportunity to slam US President Donald Trump for having an “aversion to strong women”, particularly “women of colour”, following their earlier spate of Twitter exchanges.

In September, Donald Trump resorted to Twitter to slam John Legend and his “filthy mouthed wife” – although not directly tagging her - after Legend appeared on NBC Nightly News to discuss the US criminal justice system and praise the reform group FreeAmerica founded by him. This particularly angered Donald Trump who believed that Legend was taking credit for advances in criminal justice system due to his administration efforts.

When all of the people pushing so hard for Criminal Justice Reform were unable to come even close to getting it done, they came to me as a group and asked for my help. I got it done with a group of Senators & others who would never have gone for it. Obama couldn’t come close....

....musician @johnlegend, and his filthy mouthed wife, are talking now about how great it is - but I didn’t see them around when we needed help getting it passed. “Anchor”@LesterHoltNBC doesn’t even bring up the subject of President Trump or the Republicans when talking about....

Both Legend and Teigen harshly responded to Trump’s tweets at that time.