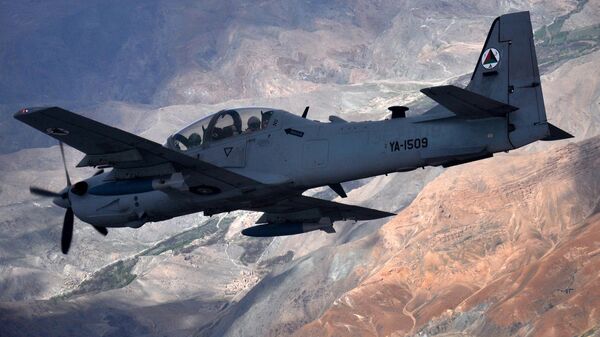 The US Air Force is seeking to acquire a half-dozen prop-driven ground attack aircraft for the purposes of developing better training and advisory programs for allies who use the planes.

To some, turboprop attack aircraft might seem like relics of the Second World War, obsolete on a battlefield dominated by Mach 2-capable stealth aircraft. However, in some parts of the world, the cheapness, agility and ease of use found in planes like the Textron Aviation AT-6 Wolverine and Sierra Nevada Corporation/Embraer Defense & Security A-29 Super Tucano have made them invaluable for cash-strapped air forces locked in combat with insurgent forces.

The US Air Force released final requests on Thursday to buy two to three of each aircraft to help the service “focus on building allies and partner capacity, capability and interoperability via training and experimentation,” according to a Friday press release by the service. A contract award is expected at the end of the year for the A-29s and early next year for the AT-6s.

​“Over the last two years, I watched as the Air Force experimented with light attack aircraft to discover alternate, cost-effective options to deliver airpower and build partner capacity around the globe,” Secretary of the Air Force Barbara Barrett said in the press release. “I look forward to this next phase.”

The Air Force will host the planes at two different airfields: the Wolverines at Nellis Air Force Base in Nevada, which houses Air Combat Command, and the Super Tucanos at Florida’s Hurlburt Field, where Air Force Special Operations Command is located.

Air Force Chief of Staff Gen. David L. Goldfein said in the Friday release that the aim is to “help our allies and partners as they confront violent extremism and conduct operations within their borders,” and one way of doing that is by ensuring they get maximum benefit from their “smaller, affordable aircraft” like the Wolverine and Super Tucano.

The program began in 2016 and found that planes like the Wolverine and Super Tucano provide all-around better mission performance than the Air Force’s A-10 Thunderbolt II close air support aircraft, which is nearing retirement and was designed to knock out Soviet tank formations if the Cold War in Europe ever got hot. Another plane tested in the program was the Swiss-made Pilatus PC-12NG.

The irony is that the A-10’s robust design grew out of the Air Force’s embarrassing shortage of ground attack aircraft during the Vietnam War, when it was forced to use A-1 Skyraiders for the role - another turboprop plane that first flew in the final days of World War II.

Beechcraft, a spinoff of Raytheon that was eventually bought by Textron, has been producing the T-6 Texan II since 2001, mostly as a training aircraft for a variety of countries around the world, with the AT-6 Wolverine combat version only recently entering consideration for use via the US Air Force.

Brazilian maker Embreier has been producing the A-29 since 2003, and the plane has found wide use among Third World air forces from Central America to equatorial Africa. The US has also overseen the Super Tucano’s incorporation into the burgeoning Afghan Air Force, which in a remarkable incidence of disparate technologies, is still able to deploy laser-guided munitions from the propeller-driven planes in its fight against the Taliban.

There’s not a world of difference between the T-29 and AT-6, either. Both aircraft use essentially the same Pratt & Whitney engine and have nearly the same maximum ferry range; however, the Wolverine has a higher maximum speed and heavier maximum lifting weight. Both planes featured side-by-side in a recent listicle of the top 10 light attack aircraft by Airforce-Technology, incidentally the only two prop-driven planes on the list.