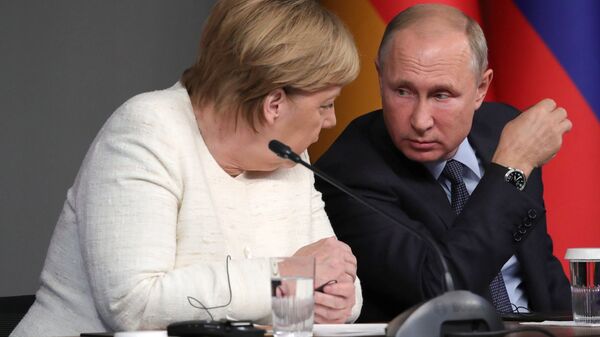 "A phone conversation has been held between Russian President Putin and the federal chancellor of the Federal Republic of Germany, Merkel. Putin has briefed her on the results of talks with the President of the Republic of Turkey, Erdogan, held on 22 October 2019, in Sochi, with an emphasis on the fact that the agreements reached take into consideration the interests of all the parties and contribute to restoring Syria's sovereignty and territorial integrity", the Kremlin said in a statement.

Both Putin and Merkel believe that the implementation of the Moscow-Ankara memorandum will contribute to the stabilisation of the situation in northeastern Syria and promote the domestic political process, including in the context of the first session of the Syrian Constitutional Committee, which will be held in Geneva on Wednesday, the Kremlin added.

The recently signed 10-point Russian-Turkish memorandum specifies that units of the Russian military police and Syrian border control be deployed to the 18-mile (29-km) safe zone in northern Syria to facilitate the withdrawal of Kurdish troops.

The Turkish offensive, which was launched on 9 October, aimed to clear the Turkish-Syrian border area of terrorists and Kurdish militia, which for Turkey are interchangeable terms, and create a so-called "safe zone" there for the further accommodation of Syrian refugees who are currently residing in Turkey. The Syrian government has condemned the Turkish offensive in northern Syria as an act of aggression.

The offensive has also faced widespread condemnation from across the globe. Berlin, Paris, and London announced an embargo on weapons exports to Turkey over the move, while Moscow has urged Ankara to refrain from actions that could create obstacles to settling the civil war in Syria, now in its ninth year.