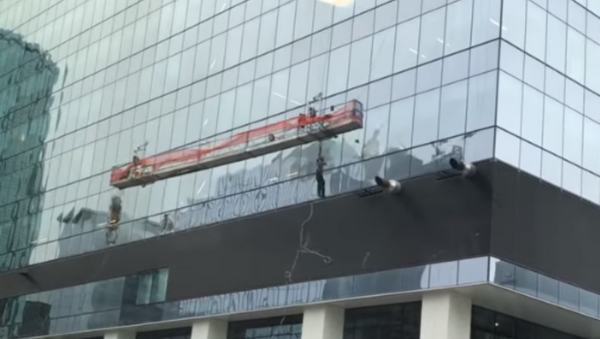 © Screenshot/Ricki Rong
Subscribe
International
India
Africa
A pair of window washers in the Canadian province of Alberta were given quite the scare Friday after a powerful gust of wind sent their scaffolding crashing into the side of the Stantec Tower skyscraper and left one of the individuals dangling from their harness.

Dramatic footage of the hair-raising incident shows the scaffolding being swung back and forth toward the opposite ends of the building before the force of the crashes ultimately sends one of the window washers over the scaffolding’s railing.

Local media outlet The Star reported that officials with the Edmonton Fire Department were able to safely rescue the two individuals, one of whom later assisted firefighters with lowering the scaffolding to the ground.

It’s unclear just how the scaffold managed to come undone. Scott Macdonald, deputy chief of operations with fire rescue, told the Edmonton Journal that the workers were about six to seven stories above ground level when disaster struck.