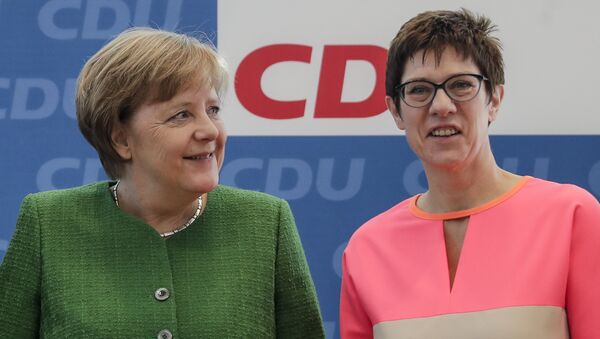 "We have been discussing this topic for a very long time at the presidium. But we again emphasized at the presidium and at the federal government that the decision of the party’s federal congress on cooperation and coalition with the Left and the Alternative for Germany remained valid. This was incontrovertible", Kramp-Karrenbauer said at a briefing.

According to the CDU head, the question of how the new government in Thuringia will look "is in the competence of the incumbent Prime Minister of Thuringia [Bodo Ramelow]".

Die Linke is leading in the regional election with 31 percent of the votes, while AfD is in second with 23 percent, an exit poll showed on Sunday.

According to the survey, conducted by the Mannheimer Forschungsgruppe Wahlen for the ZDF broadcaster, the Christian Democratic Union may count on receiving 22 percent of the votes, which would earn third place.

Kramp-Karrenbauer assumed the office of CDU head on 7 December 2018, succeeding German Chancellor Angela Merkel. The politician, however, does not enjoy wide support among Germans, according to the polls.