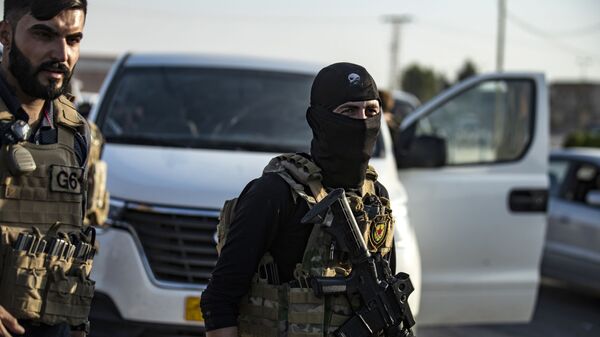 © AFP 2023 / Delil Souleiman
Subscribe
International
India
Africa
On Sunday morning, the US president confirmed earlier reports that Daesh leader Abu Bakr al-Baghdadi had been killed in a US raid in Syria, which is, however, still being questioned by other states present in the area.

A spokesperson for the Daesh* terrorist organisation, Abu Hassan al-Muhajir, has reportedly been killed in a Joint Special Operations Command raid by US military forces and the Kurdish-led Syrian Democratic Fighters (SDF), following the assassination of the group’s leader Abu Bakr al-Baghdadi, Newsweek revealed on Sunday.

The news was later confirmed by Syrian Democratic Forces (SDF) Gen. Mazloum Kobani Abdi, who announced on Twitter that al-Muhajir was targeted in the village of Ein al Baat as part of an ongoing operation to catch Daesh leaders.

Following the previous ops, a senior assistent for al- Bagdadi is called Abu Hesen al Mouhjir was targeted in a village named Ein al Baat near Jaraboul city, the mission was conducted via direct coordination of SDF Intel & US military apart the ongiong ops to hunt ISIS leaders.

​Al-Muhajir was named the group’s spokesperson in 2016 following the death of his predecessor Abu Mohammad al-Adnani during a US strike in Aleppo. His identity and origins remain unknown to the wider public.

The announcement came shortly after US President Donald Trump confirmed the death of Daesh leader Abu Bakr al-Baghdadi on Sunday morning, stating that head of the terrorist organisation “died after running into a dead-end tunnel, whimpering and crying and screaming all the way".

Trump also thanked Russia for cooperating on the matter as the US forces reportedly flew through Russian-held areas during the operation, which however has not been confirmed by Russian Defence Ministry. On Sunday, Ministry spokesperson Maj. Gen. Igor Konashenkov stated that “no strikes performed by US aircraft or aircraft belonging to the so called 'international coalition' were detected on Saturday or during the following days”.

Al-Baghdadi's death has been reported on multiple occasions over the previous few years, but no confirmation of the earlier accounts was issued before.