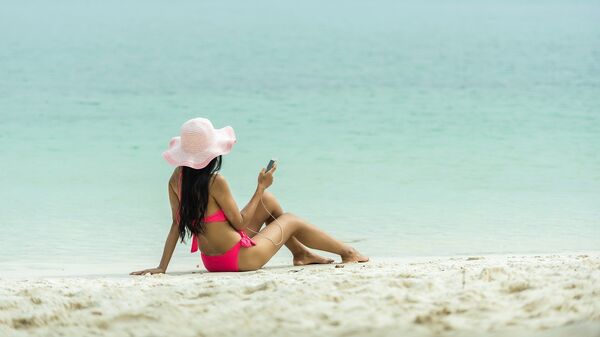 The Manchester-based brand, which sells Instagram-oriented outfits to young women, has already faced uproar this year after one of its shoppers wound up appearing almost naked when her bikini turned see-through after dip in a pool. Their new swimsuit has shown that more embarrassments may lie ahead.

Instagrammers have ridiculed a new bikini by the UK-based fashion giant Pretty Little Things that the brand has promoted on social media. A powder pink velvet combo, worn by one of the company’s models, consisting of tiny bikini bottoms and a triangle top that hardly covers the nipples and reminiscent of kinky drapes for lady parts, has made some Instagrammers ask themselves whether the outfit was too risky.

💖 HAPPY MONDAY 💖 @celestebrightt giving us EVERYTHING in the Rose Tan Velvet Toggle Triangle Bikini Top & Bottom 💕✨ 🔍 Search CMC8179 + CMC8177 🙌 Who wishes they were waking up on vacation RN? ☀️🌴

Although the label’s SMM team posed a question in the caption “Who wishes they were waking up on vacation RN?” commenters quickly drifted away from the topic. As some of them pointed out, women who dare to pick this $28 set for a poolside vacation on a tropical getaway this winter might find themselves very close to exposure.

“If she jumps it's game over!” one of the users noted in the comments, while another also questioned the practical use of the “nipple drapes”, predicting “One move and you’re screwed”.

One of the commenters asked how one can swim in this bikini, as it could be washed away after one dip.

However, as one of commenters suggested, the blonde beauty in the promo photo might have picked the wrong size: “I think she got a size too small”.

This is not the first time that the British brand has raised doubts about its swimsuit designs. In July, a 25-year-old Brit complained about a double-lined bikini that turned totally transparent after a swim in a pool during a trip to Spain, exposing the woman in front of other holidaymakers. As the firm explained to the discouraged shopper, the set was meant for "poolside posing" only.