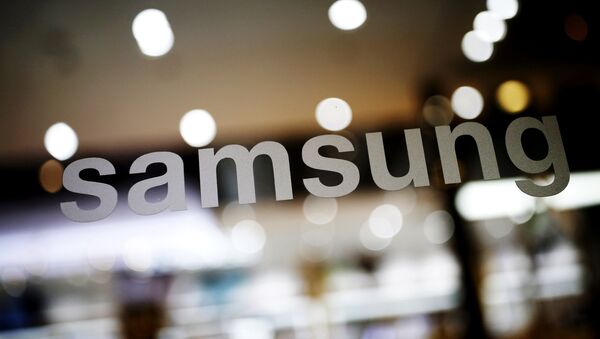 © REUTERS / Kim Hong-Ji/
Subscribe
International
India
Africa
The tech company says the promotional spacecraft experienced a “soft landing,” although local residents are grateful it did not strike their homes.

A family in Michigan woke up to a noisy racket in their garden on Saturday morning to find a space satellite stuck in the branches of a tree on their property, USA Today reported.

Upon closer examination, the noisemaker turned out to be Samsung’s much-touted SpaceSelfie pseudo-satellite, launched to let consumers make selfies against a space backdrop.

Very interesting! A space satellite launched by Samsung has fell and landed in Michigan near the Saginaw/Gratiot county line!

​"Unbelievable. Look what just fell out of the sky and 911 is baffled and it's caught up in our tree," Nancy Welke, a property owner, said in a post on Facebook. “It's never boring on the Welke farm. And it's still going and flashing.”

​The family called 911, and the fire department was dispatched to the scene. The crew briefly closed the nearby roadway, but reopened it in 30 minutes, the report says. Some of the Welke neighbors lost power for two hours while the crew removed the satellite and its balloon, the Daily Mail report says.

Samsung issued a statement, saying the satellite crash had gone as planned.

“Earlier today, Samsung Europe's SpaceSelfie balloon came back down to earth. During this planned descent of the balloon to land in the US, weather conditions resulted in an early soft landing in a selected rural area," according to a statement issued by the company. "We regret any inconvenience this may have caused.”

The SpaceSelfie was a Samsung project allowing consumers to send their selfies to the pseudo-satellite; the photo would then be displayed by a Samsung S10 attached to the spacecraft, and a fixed camera made a photo of the phone displaying the selfie against the space backdrop and transferred it back to the user. The company used a silver-colored mylar balloon to get their pseudo-satellite into upper atmosphere.

You know Zlatan is a star. Here’s the SpaceSelfie to prove it. They’re limited edition, join me and get your face in space now, visit https://t.co/I0NNitY40K. #SpaceSelfie #ad #withGalaxy pic.twitter.com/YOvMKjaORG

​"With over 200 hours at 65,000 feet above the earth, the S10 5G will showcase the strength of Samsung’s innovations and how it continues to design products that make what was previously impossible, possible," the company gushed in its press release.

It is unclear whether the S10 survived the fall and whether the Welkes get to keep the space-faring phone.

“Thank god there's no horses out and it didn't hit the house,” Nancy Welke posted to Facebook.