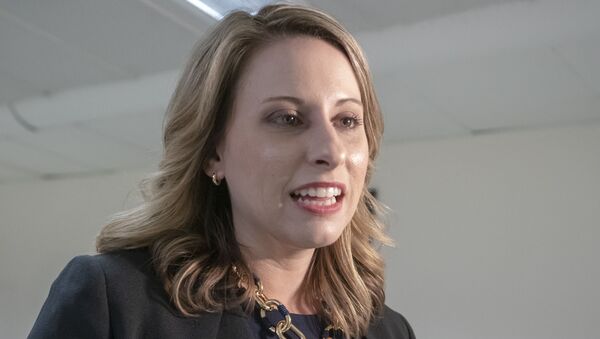 © AP Photo / J. Scott Applewhite
Subscribe
International
India
Africa
The representative, who earlier admitted to "inappropriate" relations with a female staffer, will step down by the end of the week.

US Representative Katie Hill is resigning from Congress in the wake of allegations of inappropriate sexual relationships with staffers in her office and on her congressional campaign. The lawmaker announced her resignation in a tweet.

​The representative was under investigation by the House Ethics Committee for allegations of an improper sexual relationship with a male staffer, which she denied. However, Hill admitted to and apologized for an "inappropriate" affair with a female campaign staffer earlier this week, according to Politico.

Earlier this week, The Daily Mail posted what is understood to be nude photos of Hill smoking marijuana in 2017, before the drug was legalized. The article alleged that Hill and her ex-husband, Kenny Heslep, engaged in so-called throuple relations with Morgan Desjardins. The representative threatened to file a lawsuit against the tabloid for posting private pictures without consent.

On Thursday, Hill admitted to relations with Desjardins and called for the respect of her privacy.

"I know that even a consensual relationship with a subordinate is inappropriate, but I still allowed it to happen, despite my better judgment. For that, I apologize. I wish nothing but the best for her, and hope everyone respects her privacy in this difficult time," she said.

Hill denied allegations of improper relations with her legislative director, Graham Kelly, blaming her ex-husband for what she said was a smear campaign.

"Allegations that I have been involved in a relationship with Mr. Kelly are absolutely false. I am saddened that the deeply personal matter of my divorce has been brought into public view and the vindictive claims of my ex have now involved the lives and reputations of unrelated parties," she said.