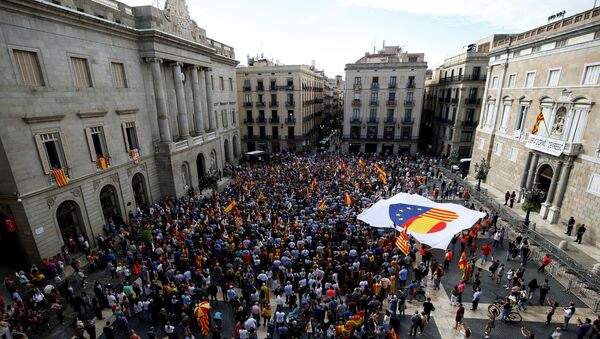 MADRID (Sputnik) - As many as 80,000 people in support of Spain’s unity are protesting in the centre of Barcelona, according to the police estimates.

The rally, organised by the Catalan civic society movement, was held under the slogan "For Concord, for Catalonia: Enough!". It was supported by representatives of the largest political parties — socialists, the right-wing People’s Party and the centrist Citizens party. The rally is broadcast by 24 Horas TV channel.

"We are those who do not burn the streets. We are those who want unity, not separation, and we take to the streets. We, the Catalans, say that we do not want to continue the 'process' [a term used by the independence supporters. We do not want barricades, insults or stones. As long as Spain is united, it is invincible," Albert Rivera, the Citizens Party president, said.

In the meantime, about 300 people, opposed to the Spanish Supreme Court's ruling to sentence nine Catalan politicians, gathered at the Sants train station in Barcelona, according to the El Pais newspaper.

The violent protests have been ongoing in Spain’s secessionist region since 14 October, when the Supreme Court sentenced several Catalan leaders to lengthy prison terms over their involvement in the semi-autonomous region's 2017 unsanctioned independence referendum. Hundreds of protesters have since been injured and detained.