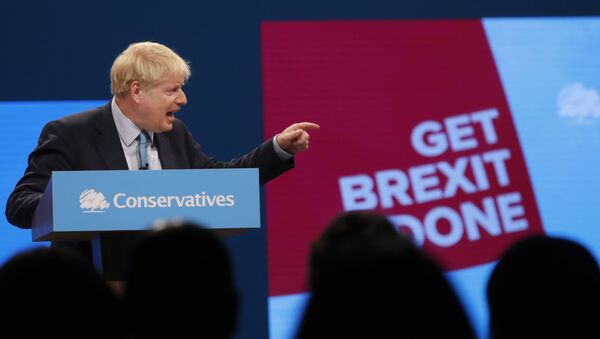 Svetlana Ekimenko
All materialsWrite to the author
As Prime Minister Boris Johnson is pressing ahead with calls for a general election on 12 December, with debate on his Brexit bill “paused” ahead of a Brussels withdrawal delay decision, a leaked document reportedly indicates the UK could deviate away from EU employee and environmental rights after exit day.

Boris Johnson is seeking a quick-fire US trade deal after Brexit that would undermine UK food standards by removing protections installed by parliament earlier this year, The Independent cites the Prime Minister’s critics as warning.

The claims have been made in the wake of the Queen’s Speech, which revealed that Johnson will introduce a new trade bill, instead of “rolling over” the trade bill from the last session before parliament was prorogued.

The Independent quotes Kierra Box, Brexit spokesperson at Friends of the Earth, as saying:

“This is clearly an attempt to make it harder for the public and parliament to ensure protections are not traded away and for the government to be held to account. It appears from comments made by Liz Truss [the trade secretary], Boris Johnson and others in cabinet that they see Brexit as a deregulatory exercise."

The Brexit spokesperson went on to emphasise:

“They see a US trade deal as the core aim of leaving the EU, despite the level of opposition in parliament and in society to Brexit leading to dirty trade deals and deregulation. And the US has made clear, since 2016, that its priority will be access for US agricultural goods produced to lower standards, as well as access for genetically modified goods.”

The warning was echoed by Labour, with Lord Stevenson, a Labour trade spokesperson, insisting:

“Ministers took this bill through the full scrutiny of both Houses and even thanked us for helping to make the legislation fit for purpose.”

The Department for International Trade defended its decision to start afresh regarding the trade bill, stating the original legislation was not intended to “deal with future free trade agreements”.

“We have been clear that we will maintain our high standards including on environmental standards as we leave the EU and negotiate new trade deals around the world,” a spokesperson said.

“The work of the House of Lords will be taken into account when preparing new legislation to provide continuity for both businesses and consumers that trade across the globe,” added the spokesperson, as quoted by The Independent.

Earlier, Prime Minister Boris Johnson told MPs the UK was committed to “the highest possible standards” on both issues – thus swaying 19 Labour MPs to back his Withdrawal Agreement Bill at second reading on 22 October.

The current news follows a leaked document revealing  that the UK government was looking into how the Brexit deal will allow it to slash protections for workers’ rights and the environment.

According to a Financial Times report, the leaked Department for Exiting the European Union (DExEU) document stated there was “room for interpretation” in the way the political declaration outlining the goals of the future UK-EU trade negotiations had affected the workers’ rights and environmental protection commitments.

The document reportedly says that “UK negotiators successfully resisted the inclusion of all UK-wide level playing-field rules” in the deal negotiated originally by the former Prime Minister Theresa May’s team, allowing Britain to compete against EU members by “possibly watering down rights”.

As the Brexit department initially declined to comment on the document, a government spokesperson was quoted by The Guardian as saying:

“The UK government has no intention of lowering the standards of workers’ rights or environmental protection after we leave the EU and we already exceed EU minimum standards in areas such as maternity leave, shared parental leave and greenhouse gas targets. UK level playing field commitments will be negotiated in the context of the future UK-EU free trade agreement, where we will achieve a balance of rights and obligations which reflect the scope and depth of the future relationship.”

UK Business Minister Kwesi Kwarteng told the BBC the claims were "completely mad" after the government had worked to win the support of Labour MPs.

The original trade bill was substantially changed in the House of Lords, to prevent ministers from pursuing and signing post-Brexit trade deals without approval by a vote in parliament.

The bill would also have forced ministers to produce assessments of the environmental and social impacts of new trade deals, with ministers obligated to guarantee that any new deals will not lower UK standards in any area.

This issue is perceived as crucial because of fears that the prime minister, if the UK does exit the EU bloc, will move quickly to secure a trade deal with US President Donald Trump. 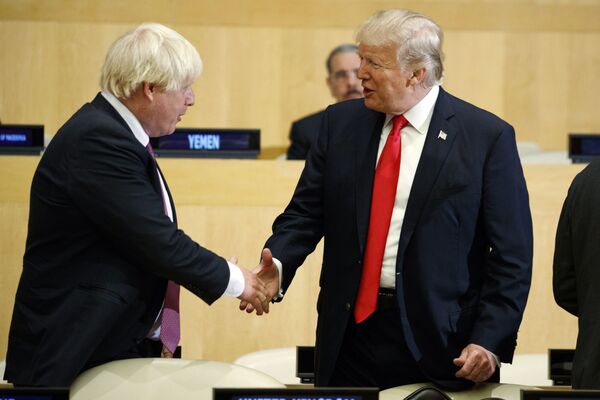 Aggressive US demands for a post-Brexit trade deal with the UK will allow in chlorine-washed chicken and ramp up the cost of NHS drugs, MPs claimed back in March.

The proposals, they insisted, would also rip up restrictions on shipping personal data out of the country, after Trump’s administration published “negotiating objectives” suggesting Britain will not enjoy softer treatment than other US allies in any trade deal.

The trade bill is one of several pieces of Brexit legislation now “paused” unless labour leader Jeremy Corbyn drops his opposition to Johnson’s call for a general election on 12 December.