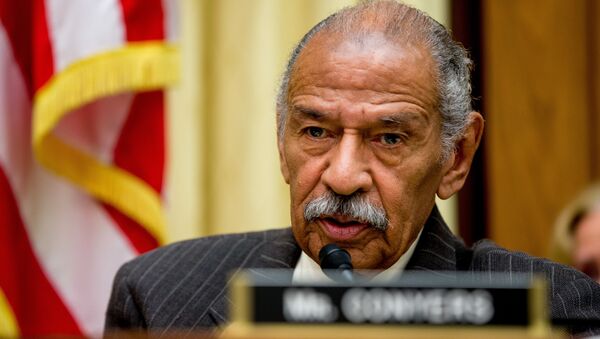 © AP Photo / Andrew Harnik
Subscribe
International
India
Africa
John Conyers, former Democratic Representative for Michigan from 1965-2017, has died at the age of 90, according to multiple reports.

According to PBS News Hour, Conyers died in his sleep. John Conyers III, son of the former congressman, said that the family would release a statement "shortly."

The son of former Rep Conyers tells me that the family will be releasing a statement shortly. “This is part of the cycle of life,” John Conyers III told me.

Mike Duggan, the mayor of Detroit, which Conyers represented in Congress, ​made an official statement following the death of the former congressman.

Conyers was the longest serving African-American member of the House of Representatives. He is known for being a founding member of the Congressional Black Caucus, one of the initiators of the establishment of the Martin Luther King Jr. holiday, among other things.

​Conyers served in the US Congress beginning in 1965, when he participated in the adoption of the Voting Rights Act, to 2017, when he resigned following accusations that he had harassed former female employees.

Back then, Conyer's lawyers denied the allegations, however, because of pressure from former House Speaker Paul Ryan and Nancy Pelosi, who was the House Democratic leader at the time, Conyers stepped down, according to The New York Times.