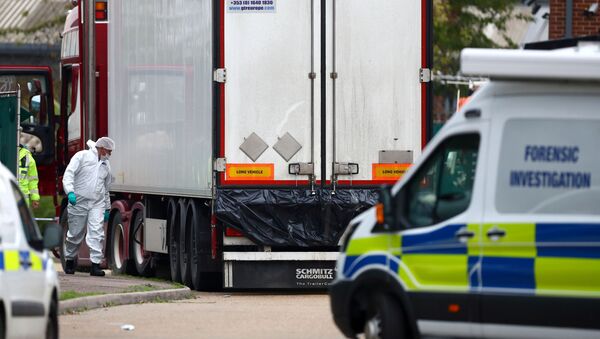 © REUTERS / HANNAH MCKAY
Subscribe
International
India
Africa
The report comes in the wake of 39 dead bodies discovered in another truck in UK’s Essex. This time, the people were still alive.

Eight migrants from Afghanistan were discovered in a refrigerator truck heading to the UK during an inspection in a French port, the Parisien reported Sunday, citing the Boulogne-sur-Mer’s prosecutor’s office.

The migrants were found in a state of mild hypothermia and transported to a hospital in Calais.

The migrants were reportedly hidden in a double bottom of the refrigerator compartment with the door locked from the outside. It was about 7 degrees Celsius inside, authorities said. The truck drew suspicions from the customs officers because it did not contain merchandise.

Earlier this week, 39 corpses were found in a locked refrigerator truck in UK’s Essex. A coroner will perform an examination of all the victims to determine the cause of death, according to The New York Times, but suffocation in the airtight compartment and/or severe hypothermia because of automatic refrigerator equipment are believed to be the most probable reasons.