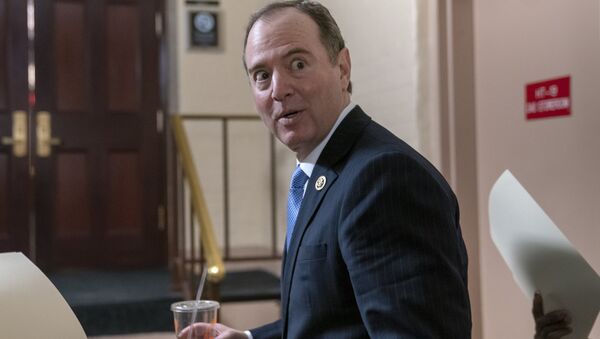 © AP Photo / J. Scott Applewhite
Subscribe
Ekaterina Blinova
All materialsWrite to the author
House Republicans have raised the alarm over the legality of the impeachment inquiry conducted by their Democratic counterparts. American political analysts William Dunkerley and Max Parry explain why the House Dems' probe could backfire.

On 23 October, dozens of House Republicans led by Matt Gaetz stormed a closed-door impeachment hearing in an act of protest against non-transparency of the proceedings led by House Intelligence Committee Chairman Adam Schiff.

"What is Adam Schiff trying to hide?" House Republicans are asking.

On the same day, Republican congressmen Jim Jordan, Devin Nunes and Michael McCaul wrote a letter to Schiff urging him to "arrange for the Committees to receive public testimony" from the whistleblower, whose complaint became the trigger for the probe, as well as "all individuals he or she relied upon".

Hats off to @RepMattGaetz for leading the charge as dozens of my outraged colleagues demand a stop to the unprecedented secrecy of this "impeachment inquiry."

These dungeon trials are making a mockery of justice. The American people believe in fairness.

​Republican lawmakers argue that so-called impeachment inquiry kicked off by House Speaker Nancy Pelosi on 24 September is null and void given that she skipped the floor vote thus depriving the House minority of the right to issue subpoenas and cross-examine witnesses.

For its part, the White House made it clear on 9 October that it would not cooperate with the House Dems' investigation which is conducted "contrary to the Constitution of the United States and all past bipartisan precedent".

Why the US Establishment is Seeking to Remove Trump

Nevertheless, the "impeachment inquiry" propelled by the House Democrats is still raging on - much to the glee of the left-leaning mass media.

"The so-called impeachment inquiry is being held despite its departure from constitutional procedures because it is essentially a soft coup attempt at removing Trump and an entirely politicised investigation," says Max Parry, an independent American journalist and geopolitical analyst.

According to the analyst, Trump's conduct is far from being flawless and the US president has himself violated the Constitution by, for example, unilateral bombing of Syria without congressional approval which could be used by his opponents to expel him from the Oval Office.

"Instead, they are only interested in removing Trump because he has committed the offense of breaking from the establishment consensus," the journalist opines. "Even though he has expanded NATO with Montenegro, armed Ukraine in the Donbass war, pulled out of the INF Treaty, scrapped the Iran deal, and bombed Syria, the neocons in Washington are still unsatisfied because he has hinted at the idea of rapprochement with Moscow and scaled back the US presence on the ground in Syria." 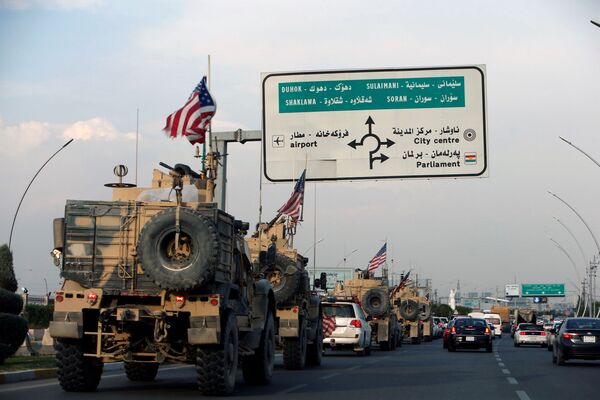 A convoy of U.S. vehicles is seen after withdrawing from northern Syria, in Erbil, Iraq October 21, 2019
© REUTERS / AZAD LASHKARI

Dems Have Yet to Present Evidence of Trump's Impeachable Crimes

William Dunkerley, author, media business analyst and consultant based in New Britain, Connecticut, stresses the Democrats have not yet presented any evidence of Trump's impeachable crimes in the first place.

"There's not been very much yet", he says. "It really will depend on what emerges. So far, I don't think anything really solid has emerged against President Trump on the issues that are being talked about."

As for the Democrats secretiveness, it does not really make sense, according to the author: "the Democrats contention that they don't want the witnesses to hear what each other would say in testimony" is dubious given that "there's nothing stopping them from getting together on their own and exchanging notes outside of the hearing."

The rebuke of Adam Schiff’s Kangaroo Court is bipartisan. https://t.co/1Xv7SxNovc

​The analyst regards the so-called impeachment inquiry as "an ongoing process that began with the election of Donald Trump". He points out that from day one Trump's political opponents have been trying "to nullify the validity of his election and to give him basically as much trouble as they can," starting with the fuss over the Electoral College vote and ending with the ongoing Ukrainegate.

"So there's been one attempt after another - on the part of Trump's political opponents to try to put roadblocks in the way of doing what he wants to do," Dunkerley highlights. 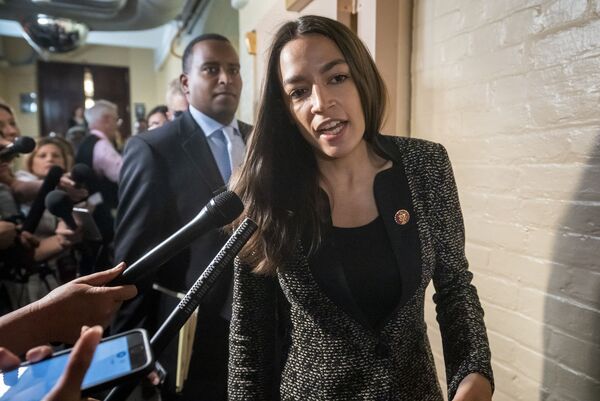 Rep. Alexandria Ocasio-Cortez, D-N.Y., followed by Rep. Joe Neguse, D-Colo., responds to reporters' questions after Speaker of the House Nancy Pelosi, D-Calif., met with all the House Democrats, many calling for impeachment proceedings against President Donald Trump after his latest defiance of Congress by blocking his former White House lawyer from testifying yesterday, at the Capitol in Washington, Wednesday, May 22, 2019
© AP Photo / J. Scott Applewhite

However, the US left-leaning mainstream media is claiming that this time the Dems won't let Donald Trump off the hook.

"Impeachment is too important to leave to Congress — it’s going to take mass mobilisation", foresees Vox.

“He has committed impeachable crimes. It’s just a question of how many and how many people were involved and who knew." pic.twitter.com/TTltj4dRbD

​According to Parry, we have already seen this when the Democratic Party was predicting Trump's ouster over the Russiagate hoax. Make no mistake, "this is the same media that predicted a Clinton landslide," the journalist remarks.

Why Dems Still Have Little Chance of Beating Trump in 2020

Max Parry argues that the House Dems' impeachment push is going to backfire on them "because historically impeachment ultimately helped those who have been subject to it in the past".

"We don't have many examples to go on, obviously, but impeachment raised Clinton's approval rating and when the [Special Counsel Robert] Mueller report turned out to be a dud, there was an uptick in Trump's favorability," the journalist recalls. "This is also a lost cause because although it may pass the house, the Democrats are unlikely to get enough GOP senators to support it for him to be removed from office."

As a result, the Democratic Party is facing yet another resounding defeat in 2020 unless they find a worthy adversary for Trump, according to the analyst.

"I think unless the Democrats nominate [Bernie] Sanders or another non-party/non-establishment candidate, especially with these proceedings going on during the campaign which will inevitably help him, they have little chance of beating Trump," Parry concludes.

000000
Popular comments
CosmicPlatypus, Of course hired assets/low-level thugs take care of all the dirty business.
Kt
26 October 2019, 17:29 GMT1
000000
The floor vote is necessary for fairness, transparency, and even for posterity. Future generations of Americans who will be studying these events will benefit from having a record of who among the sitting Dems actually believed that this impeachment charade was worth pursuing. If the Republicans gain control of both the House and the Senate after the next rounds of elections, they should consider passing laws that codify transparency in impeachment proceedings.
Kt
26 October 2019, 08:23 GMT
000000
Newsfeed
0
New firstOld first
loader
LIVE
Заголовок открываемого материала
Access to the chat has been blocked for violating the rules . You will be able to participate again through:∞. If you do not agree with the blocking, please use the feedback form
The discussion is closed. You can participate in the discussion within 24 hours after the publication of the article.
To participate in the discussion
log in or register
loader
Chats
Заголовок открываемого материала
Worldwide
InternationalEnglishEnglishMundoEspañolSpanish
Europe
DeutschlandDeutschGermanFranceFrançaisFrenchΕλλάδαΕλληνικάGreekItaliaItalianoItalianČeská republikaČeštinaCzechPolskaPolskiPolishСрбиjаСрпскиSerbianLatvijaLatviešuLatvianLietuvaLietuviųLithuanianMoldovaMoldoveneascăMoldavianБеларусьБеларускiBelarusian
Transcaucasia
ԱրմենիաՀայերենArmenianАҧсныАҧсышәалаAbkhazХуссар ИрыстонИронауОssetianსაქართველოქართულიGeorgianAzərbaycanАzərbaycancaAzerbaijani
Middle East
Sputnik عربيArabicArabicTürkiyeTürkçeTurkishSputnik ایرانPersianPersianSputnik افغانستانDariDari
Central Asia
ҚазақстанҚазақ тіліKazakhКыргызстанКыргызчаKyrgyzOʻzbekistonЎзбекчаUzbekТоҷикистонТоҷикӣTajik
East & Southeast Asia
Việt NamTiếng ViệtVietnamese日本日本語Japanese俄罗斯卫星通讯社中文（简体）Chinese (simplified)俄罗斯卫星通讯社中文（繁体）Chinese (traditional)
South America
BrasilPortuguêsPortuguese
NewsfeedBreaking
11:15 GMTMassive Plume of Smoke Reportedly Spotted Rising From Major US Base in Iraq - Video
11:13 GMTFrance Hardens Visa Rules for Moroccans, Algerians, Tunisians
11:05 GMTMan Who Threw Egg at Macron Admitted to Psychiatric Hospital
10:44 GMTGeorgina Rodriguez Desperate to Be Cristiano Ronaldo's Wife, Waiting for Man Utd Star to Propose
10:27 GMTTrump Facing Possible Criminal Liability For ‘Sustained Assault’ on Georgia’s Electoral Vote Count
10:25 GMTMilley Preps for Congressional Grilling Over ‘Treasonous’ Phone Call to PLA Head Behind Trump’s Back
10:17 GMTMoscow Calls on NATO, EU to Urge Pristina to Withdraw Forces From Kosovo and Prevent Escalation
10:15 GMTEuropean Parliament President Says German Elections Testify to Stability of Europe
10:12 GMTKremlin Sees No Reason for Ukraine to Be Hysterical About Russian-Hungarian Gas Contract
10:01 GMTCampaign Ads Offering 'Russian Virgins & Cocaine' on a Menu Outrages Embassy in Spain
10:00 GMTUK's Labour Party Blames Government for Fuel Crisis
09:08 GMTFrench Sanofi Gives Up mRNA COVID-19 Vaccine Development Over Saturated Market
08:42 GMTUK to Start First Round of Talks on Joining Trans-Pacific Trade Bloc
08:40 GMTTwitter Frenzy as UEFA Scraps Decision to Fine European Clubs for Launching Super League
08:36 GMTHaiti Dismisses Highly-Criticized Electoral Council, Prime Minister’s Office Says
08:34 GMTBeijing on Exclusion From Dukovany NPP Project: We Hope Prague Will Respect Market Rules
08:30 GMTDemi Lovato Opens Up About 'Warm and Loving' UFO Interaction
08:27 GMTBudapest Summons Kiev's Ambassador to Discuss Reaction to Gas Deal With Russia, Reports Say
07:58 GMTYouTube Removes Content 'Casting Doubt Over Elections in US, Germany'
07:56 GMTPolice Chief in Utah Takes Leave of Absence Amid Gabby Petito 911 Call Handling Probe