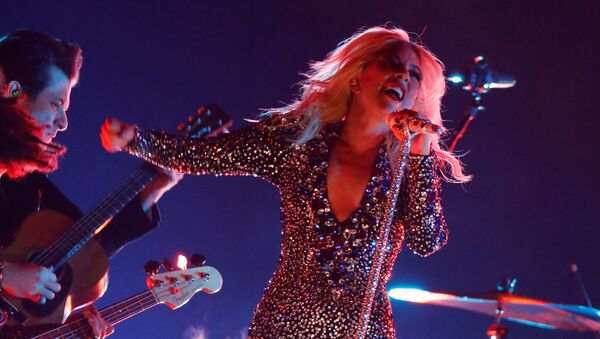 © REUTERS / Mike Blake
Subscribe
Amanda Knox spent almost four years in prison before her sentence was overturned, so it’s safe to say she knows more about prison than the pop singer.

Lady Gaga has compared fame to prison, but an American woman who was wrongfully convicted for murder says the metaphor is inaccurate at best.

The Bad Romance singer, whose real name is Stefani Germanotta, tweeted on Friday that “fame is prison.” Fame is the name of her debut album, which focused on the nature of stardom and the meaning of being a celebrity.

While some users came up with sarcastic responses, like “Then you must be a free woman” and “You should try poverty with kids”, there was one person that just wasn’t having it.

Her name is Amanda Knox, and she has been convicted and exonerated in the sensational Meredith Kercher murder case.

She quote-tweeted Lady Gaga, writing: “I hear you, but… prison is prison.”

Amanda, 20 years old at the time, and her then-boyfriend, Raffaele Sollecito, were arrested in November 2007 on charges including the murder of Kercher in the university town of Perugia. Kercher was found nude in their apartment under a blanket, with her throat slit.

Knox and Sollecito were convicted in December 2009, receiving 26- and 25-year prison terms, respectively, and acquitted in October 2011.

The process has drawn increased media attention in the United States, where forensic experts have long cited a lack of evidence of wrongdoing on the part of Knox and Sollecito. Prosecution successfully appealed their acquittal in a second-level trial, and Knox and Sollecito were found guilty again in January 2014 but ultimately exonerated in March 2015.

Ivorian immigrant Rudy Guede, an acquaintance of Knox and Sollecito, was arrested shortly after the discovery of his bloody handprints in Kercher’s apartment and his DNA in a vaginal swab taken from the victim. He was found guilty in a special fast-track procedure and is currently serving a 16-year prison term. He has been granted permission to leave prison during the daytime to work at a centre for criminology studies.

In January this year, Europe's human rights court ordered Italy to pay Amanda Knox around $20,000 in damages, costs and expenses for police failure to provide her legal assistance and a translator during the initial questioning following the murder.

“For me this is a certification of a mistake, probably the biggest legal mistake in the last years in Italy, also because the attention that this case has had,” Knox’s defence attorney Dalla Vedova said at the time.

000000
Popular comments
Knox was guilty, but the US cowed Italy into the ridiculous appeal. One day justice for victim will come.
professor.hornblow
26 October 2019, 15:16 GMT1
000000
I understand what Gaga was saying and I think she was making a point that many others have done before her. For others to take her words literally and use them for an easy attack on her is lazy self righteous opportunism .
ian
26 October 2019, 16:33 GMT
000000
Newsfeed
0
New firstOld first
loader
LIVE
Заголовок открываемого материала
Access to the chat has been blocked for violating the rules . You will be able to participate again through:∞. If you do not agree with the blocking, please use the feedback form
The discussion is closed. You can participate in the discussion within 24 hours after the publication of the article.
To participate in the discussion
log in or register
loader
Chats
Заголовок открываемого материала
Worldwide
InternationalEnglishEnglishMundoEspañolSpanish
Europe
DeutschlandDeutschGermanFranceFrançaisFrenchΕλλάδαΕλληνικάGreekItaliaItalianoItalianČeská republikaČeštinaCzechPolskaPolskiPolishСрбиjаСрпскиSerbianLatvijaLatviešuLatvianLietuvaLietuviųLithuanianMoldovaMoldoveneascăMoldavianБеларусьБеларускiBelarusian
Transcaucasia
ԱրմենիաՀայերենArmenianАҧсныАҧсышәалаAbkhazХуссар ИрыстонИронауОssetianსაქართველოქართულიGeorgianAzərbaycanАzərbaycancaAzerbaijani
Middle East
Sputnik عربيArabicArabicTürkiyeTürkçeTurkishSputnik ایرانPersianPersianSputnik افغانستانDariDari
Central Asia
ҚазақстанҚазақ тіліKazakhКыргызстанКыргызчаKyrgyzOʻzbekistonЎзбекчаUzbekТоҷикистонТоҷикӣTajik
East & Southeast Asia
Việt NamTiếng ViệtVietnamese日本日本語Japanese俄罗斯卫星通讯社中文（简体）Chinese (simplified)俄罗斯卫星通讯社中文（繁体）Chinese (traditional)
South America
BrasilPortuguêsPortuguese
NewsfeedBreaking
04:30 GMTGoing Scuba Diving: Adorable Golden Retriever Pup Sleeps in Water Bowl
04:00 GMTNewsom: California to Nix the Word 'Alien' From State Laws on Immigration
03:45 GMTMexican Soldiers Detained by Border Patrol Near Puente Libre - Authorities
03:35 GMTUN Secretary General Holds Talks With Foreign Ministers of Armenia, Azerbaijan
03:25 GMT'Country Has Gone to Hell': Trump Urges US Voters to Back 'America First' GOP Ahead of 2024 Election
03:18 GMTRussia Has ‘Thoughtful Optimism’ on Possibility of Restoring Iran Nuclear Deal - Lavrov
03:01 GMTMcConnell Refuses to Rule Out GOP Blockade of a Biden SCOTUS Nominee
00:38 GMTVideo: Amtrak Cross-Country Train Derails in Montana, Leaves Dozens Injured & At Least 3 Dead
00:00 GMTGerman Voters Going to Polls in Election That Marks End of Merkel's 16 Years as Chancellor
YesterdayVenezuelan Government Delegation Arrives in Mexico For Talks With Opposition - Maduro
YesterdayLavrov Says Borrell Told Russia to Get Out of Africa
YesterdayFour Teens Charged With Plotting School Attack on 25th Anniversary of Columbine Shooting
YesterdayMagnitude 5.0 Earthquake Rocks Taiwan - EMSC
YesterdayGermany Election: Merkel Warns Country's ‘Future’ at Stake Over Possible Left Swing
YesterdayAnthony Joshua Suffers Shock Loss to Oleksandr Usyk as Big Time Boxing Returns to UK After Pandemic
Yesterday'Things Happen': Trump Says 'Bad Call' From Doctor Would Possibly Prevent 2024 Election Run
YesterdayNorth Korea Ready for Talks With South on Ending 71-Year State of War
YesterdayTexas Democrat Not Ridin' With Biden on 'Trump'-Style Deportations to Haiti
YesterdayFrench Capital Sees 11th Weekend of Protests Against COVID-19 Passes
YesterdayLancet Task Force Probing COVID Origins Disbanded 'in Favour of Wider Biosafety Research'