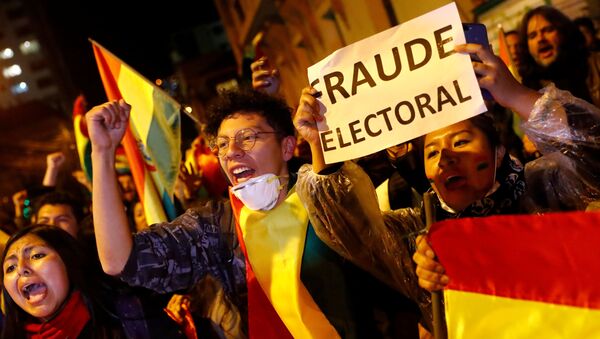 BUENOS AIRES (Sputnik) – Bolivia is open for a review of the presidential election results by the Organization of American States (OAS) and the European Union, Maria Eugenia Choque, the head of the Latin American country’s Supreme Electoral Tribunal, said in a wake of public unrest over the vote.

The vote took place on Sunday and saw incumbent President Evo Morales securing his fourth term in office by winning in the first round of the election. However, the opposition has protested the election results, citing the lack of transparency in vote-counting. The OAS, which was invited the authorities to hold the audit of the process, advised them to hold the second round of the vote. The recommendation was supported by the European Union, Argentina, Brazil, Colombia and the United States.

"The OAS, EU and other international and political organizations may hold an audit. We are absolutely open for it," Choque said in a statement to reporters, which was aired live on the tribunal’s Facebook late on Friday.

According to the Supreme Electoral Tribunal, Morales garnered 47.08 percent of the vote, while his rival, Carlos Mesa, gained 36.51 percent. Morales secured a 10.57 percent margin over Mesa’s result, which allows him to avoid the run-off.

Morales declared his victory back on Thursday before all the ballots were counted and the final results were officially announced. Mesa refused to recognize the results.

The uncertainty surrounding the vote prompted public unrest. Morales accused the opposition of trying to overthrow him.