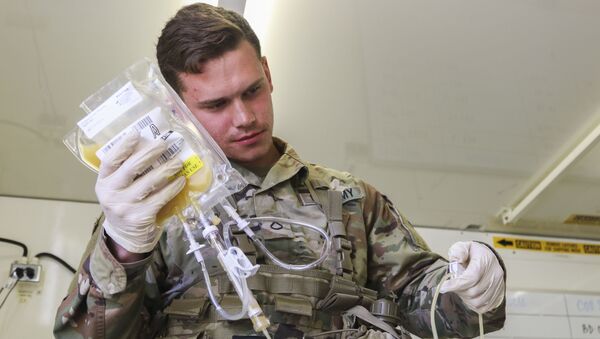 The algorithm is in the early stages of development and although showing some success is still far from being deployed in the field, the developers say.

The US military has developed an algorithm that can predict illness in soldiers some 48 hours before noticeable symptoms begin to show, Nextgov.com reported. Although the system is in its early developmental stages and is not ready for use, it has proven its capability to predict disease with more than 85 percent accuracy, the developers claim.

The algorithm, called Rapid Analysis of Threat Exposure (RATE), is being developed by an IT company named Royal Phillips in conjunction with the Defense Threat Reduction Agency (DTRA) and the Defense Innovation Unit (DIU). DIU provides funding through Other Transaction Authority – a procurement mechanism outside Federal Acquisition Regulations (FAR), the report says.

“By coupling large-scale data, with our experience in AI and remote patient monitoring with DTRA’s drive for innovation, we were able to develop a highly predictive early-warning algorithm based on non-invasively collected biomarkers,” stated Joe Frassica, chief medical officer and head of research for Philips North America, adding that RATE’s dataset is gathered from “acute care settings.”

The algorithm uses 165 biomarkers gathered across 41,000 cases in clinical settings, the Phillips statement said. The medical data will remain Phillips’s intellectual property and the US military will lease the information, according to the report.

RATE gathers patient data two ways: from lab testing of samples and via “non-invasive” means, such as a wearable device. Edward Argenta, science and technology manager for DTRA’s Joint Science and Technology Office, says the team will prioritize the latter method so that soldiers can simply wear devices like bracelets or chest-mounted monitors.

“The goal of my portfolio is to never prick or stick or take a sample out of you,” Argenta asserted, according to Nextgov. “If I can do everything remotely, digitally, from monitoring you with a wearable device that might sit on your body—like a watch-based one or a chest strap one—that’s where the portfolio has been focused on.”

The non-invasive approach analyzes parameters such as heart rate, oxygen levels in the bloodstream, blood pressure and temperature. It is unclear whether these data alone would be enough for diagnosis, or whether it would act as a warning system warranting an actual medical exam.

Argenta acknowledges that his company has no idea how their software product would be deployed in the field, as new equipment must first pass a military assessment process known as ‘doctrine, organization, training, materiel, leadership and education, personnel and facilities (DOTMLPF)’. Amending military doctrine to incorporate additional gear is problematic and requires compelling justification, according to the report.

“During the next two years, we’ll be going out to the tactical level and seeing if this [early] success warrants going through some DOTMLPF changes,” he said.

The developers foresee improving the software to the point where it can predict how long it would take a soldier to recover, so that commanders have hard data of force readiness.

“We think this first, initial capability is really exciting,” he said, adding that it will “open up the door for us to continue resourcing it and continue funding the research and development of it to see how far we can go.”