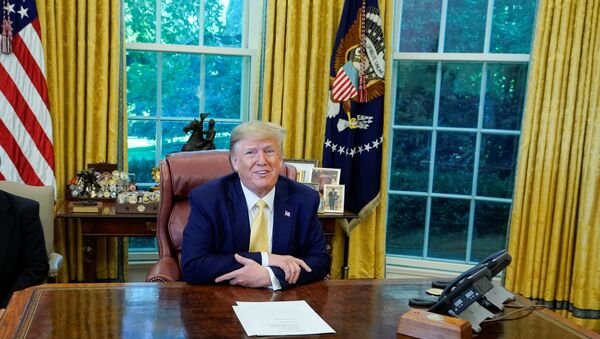 Oleg Burunov
All materialsWrite to the author
Earlier, US House Republican leaders called on Intelligence Committee Chairman Adam Schiff to allow a whistleblower in the Trump-Zelensky phone call scandal to testify publicly before Congress. The whistleblower’s complaint over the call had earlier led to Democrats launching an impeachment inquiry against the US President.

House Democrats have claimed that a whistleblower’s testimony in the impeachment investigation against President Donald Trump is no longer central to the probe, because they allegedly have “ample testimony” from senior White House officials to support the whistleblower’s claims, The Washington Post cited an unnamed source as saying.

The source insisted that currently, there are no active efforts to arrange for the whistleblower’s testimony, a view that was echoed by House Democrat Gerald Connolly, a member of the Oversight and Foreign Affairs committees.

“I think it’s quite clear we have a surfeit of evidence that corroborates in full every aspect of what happened and the policy they were pursuing,” he asserted.

A spokesman for House Intelligence Committee Chairman Adam Schiff declined to comment on the matter.

Connoly’s remarks come after US House minority leader Michael McCaul along with congressmen Jim Jordan and Devin Nunes in a letter to Schiff in Wednesday called for the whistleblower to testify publicly before Congress.

“As the so-called impeachment inquiry gathers information that contradicts the employee's allegations, we ask that you arrange for the committees to receive public testimony from the employee and all individuals he or she relied upon in formulating the complaint,” the lawmakers underscored.

They added that Schiff earlier claimed that the whistleblower would provide "unfiltered" testimony soon but that he then reversed course, following revelations that the employee had a bias against President Donald Trump.

The lawmakers argued that the failure to arrange public testimony of the whistleblower may be considered as evidence of Schiff's denial of fairness and due process.

In a separate development, Senate Republicans Mitch McConnell and Lindsey Graham introduced a resolution which described the impeachment probe as unfair to President Trump.

Democrats’ impeachment inquiry was launched in September after the whistleblower’s complaint in relation to a 25 July phone call between Trump and his Ukrainian counterpart Volodymyr Zelensky.

POTUS is accused of threatening, during the call, to withhold military aid to Ukraine if Kiev failed to probe the alleged illegal business activities of former US Vice President and 2020 presidential candidate Joe Biden’s son Hunter in the country.

Trump has repeatedly denied any wrongdoing and accused House Democrats of waging a political witch hunt. He also called for them to reveal the name of the whistleblower, tweeting that “like every American, I deserve to meet my accuser, especially when this accuser, the so-called ‘whistleblower,’ represented a perfect conversation with a foreign leader in a totally inaccurate and fraudulent way”.