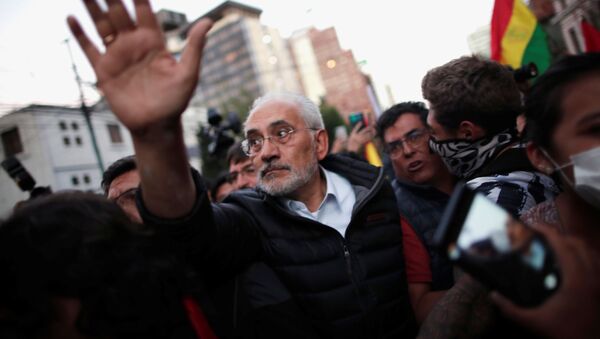 © REUTERS / UESLEI MARCELINO
Subscribe
The president of Bolivia, Evo Morales, denounced the ongoing coup attempt which has led to attacks on elected official candidates, the burning of Electoral Court headquarters and questions about the legitimacy of last Sunday’s elections.

President Evo Morales denounced the coup taking place in Bolivia. After Sunday’s elections, “the idea of ​​fraud is being established in the public and, in parallel, the coup mechanism is being created from the outside,” Helena Argirakis, a Bolivian political analyst specialising in ethics and government transparency, said. She insists that the anti-government forces hope to copy the tactics used by opposition forces in Venezuela.

For Mrs. Argirakis, “Bolivia is experiencing the projection of the political moment of 2008, when a civic-prefectural coup took place. Now there is a coup attempt, with other characteristics and other actors.”

"On Sunday, preliminary results were presented that said the President got 45 percent of the votes, while Carlos Mesa got 38 percent. At that time the media started talking about a second round. However, the votes from rural areas, which are historically favourable to the MAS (Movimiento al Socialismo) Party, hadn’t been calculated yet. The coup started from the statements about the second round," she explained.

"Meanwhile, the opposition Civic Committee For Santa Cruz, which had generated a political agreement with the Citizen Community, the party of the opposition candidate, Carlos Mesa, mobilised to press for a second round. They called for an indefinite civic strike and a town council meeting to make Mesa President of Bolivia," she said.

Argirakis also referred to acts of vandalism that took place after the election. They burned ballot boxes and set fire to the departmental electoral courts to convince the citizens of ​​fraud.

"This is distracting attention from the electoral process and depriving it of credibility. Parallel to that, the coup machinery is being created from the outside with civic committees; and Mesa is calling for mobilisation to defend the vote and what he calls the end of the dictatorship in Bolivia. This scenario is very similar to that of Venezuela. This civic committee convened a council on Thursday to support Mesa. The opposition wants to make him a Bolivian Guaidó," the professor of International Relations at the NUR University of Santa Cruz said.

The analyst indicated that the scenario echoes the situation that Morales himself went through in 2008, although at that time a negotiated solution was found.

“The interrelation of forces is different now. Many of us believe that what the opposition is looking for is a scenario of confrontation, violence and death, and to then call for international humanitarian aid,” Argirakis warned.