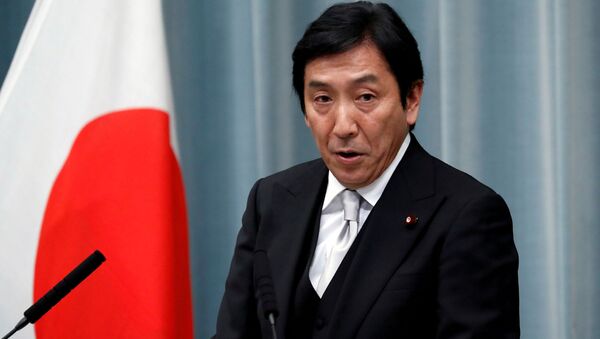 Abe said that he accepted Sugawara's resignation after a cabinet meeting on Friday.

"I bear responsibility in having appointed him. I deeply apologise to the Japanese people," Abe said, cited by AFP.

Hiroshi Kajimaya, formerly a minister in charge of revitalising communities in the countryside, will reportedly become the new trade minister.

Earlier, the Japan Times reported that Japanese Trade Minister Isshu Sugawara had said that he would step down from the position amid accusations of violating election campaign law.

Sugawara offered his resignation on Friday, following accusations that he had violated an election campaign law by illegally giving condolence money to his supporters, AP reported.

According to the Japan Times, Sugawara announced on Friday he will step down from the position after the Shukan Bunshun, a weekly tabloid magazine, reported that the minister's secretary gave condolence money under Sugawara’s name to the family of a deceased supporter.

After the Shukan Bunshun report, opposition lawmakers pushed Sugawara to resign, noting that if there was no credible explanation for the tabloid's allegations, the opposition would boycott all parliamentary sessions.