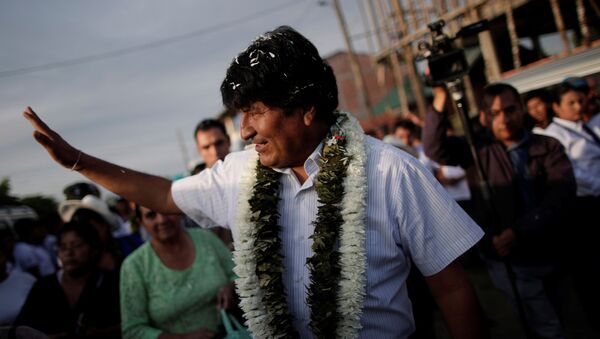 The official result was delayed by votes in the Beni region. Now that those votes have been incorporated, the Bolivian authority has declared the victory for Evo Morales.

The official vote count for Bolivia's presidential election was officially completed Friday, giving Movement to Socialism leader Evo Morales the victory with 47.08 percent of the vote, while opposition leader Carlos Mesa won 36.51 percent. With a greater than 10 percent difference between the candidates, there is no need for an election runoff, according to Bolivian law.

While the victory was first announced Thursday, after counting 99.99 percent of the vote, the official result was delayed because of the Beni region which saw votes cancelled over claims of irregularities. In the Thursday results, the remaining 0.01 percent of the votes were marked as annulled.

In the table, published by the tribunal late on Friday, the annulled ballots line read 0 percent.

Hours before the final result was announced, Morales invited the international community to perform a "vote by vote" count of the election results, in a bid to demonstrate that allegations of electoral fraud were false, the report says.

"If you have any doubts, welcome, [...] to perform the audit, the vote by vote count," he said, according to RTVE. "We call on organizations, opponents, parties, to go municipality by municipality, count vote by vote."

Allegations of electoral fraud made by Mesa last week sparked protests in several Bolivian cities that turned violent, as clashes with police saw several electoral offices set on fire. Four nations from the Organization of American States, including the US, called on Bolivia to hold a second election round.