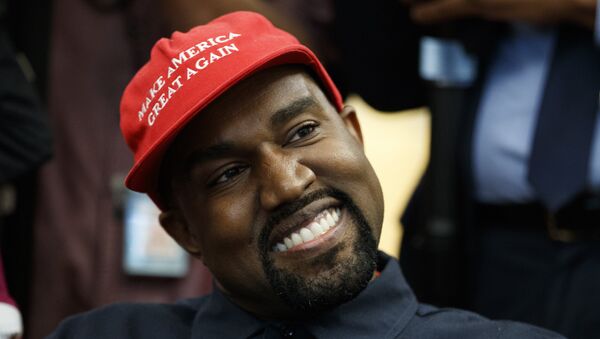 Rap star and now gospel music advocate Kanye West has a history of making provocative comments. The entertainer, a supporter of US President Donald Trump, has previously suggested he would make a presidential run, both in 2015 and in 2018.

Kanye West sent Twitter into a furor on Thursday after predicting that he will one day become President of the United States, during an explosive interview with Zane Lowe for Apple Beats 1 radio.

The rapper, 42, sat down for the interview in Wyoming, spilling all while revealing that he is developing a potential 2024 presidential run.

The rap superstar and husband of Kim Kardashian claimed that when he wins the election he "will remember ... any founder that didn't have the capacity to understand culturally what we're doing".

The "founder" comment could have an array of meanings but potentially refers to Facebook and Twitter bosses, Mark Zuckerberg and Jack Dorsey, who he specifically mentioned.

Social media users varied in their reactions to the comments, with some supporting the singer.

Kanye West predicts he'll one day be President of the United States, and when he is---he'll remember all the haters! 😍😮🥺🇺🇸

Some questioned whether it's really that unrealistic, given that the current occupant of the White House is an ex-celeb.

Is Kanye wanting to be president really that far fetched? I don't think it will happen personally, but it's been proven now that entertainers and businessmen can be elected.

Others swore off celebrity presidents.

Dawg I swear if we upend up with Kanye as president after this shit storm we have in office I’m packing my shit and moving to Colombia https://t.co/lgcuV6kOg9

Kanye like Trump is a con artist. I knew he planned to run for president & that's why he suddenly wants Kim to keep her clothes on & find a "cause". Kim & Kanye are opportunist. Anyone who'd vote for him to be president especially after having Trump is a FOOL. pic.twitter.com/3s32aNqSon

In recent months, West has made another turn toward religion. Declaring that his upcoming 9th album 'Jesus Is King' (to be released on Christmas day) is a gospel album, and even saying that he eventually wants to write music "just for the church".

West has notoriously supported Trump in recent years, including meeting with the president in the Oval Office in October 2018, and in December 2016 at Trump Tower in New York City, following the latter's election victory.

West has made previous suggestions that he would consider a presidential run. In September 2018 during a radio interview with Power 92 Chicago’s DJ Pharris he said “If I decide to do it, it will be done, I’m not going to try”.

West first announced his intention to launch a presidential bid during an appearance at the 2015 MTV Video Music Awards, declaring “I have decided in 2020 to run for president”

If a President Kanye West were to become a reality, he would be the third US president to have once had a career in show business, succeeding Ronald Reagan and Trump.