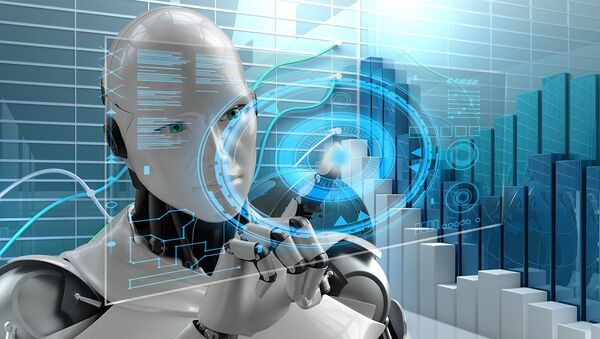 CC0 / /
Subscribe
Pierre Fautrel one of the members of Obvious, the french art collective that creates art with AI algorithms, talks about the impact of artificial intelligence art.

They wish to explore, use and share the different ways machine learning algorithms can catalyze our natural creativity. Their works have been enlightened via an auction at Christie's NY ending up at 432 000$ last October.

Sputnik: Christie's auction house in New York has sold its first picture created by artificial intelligence. "Portrait of Edmond de Belami" went under the hammer for $432,500. You developed an algorithm which gives a computer the ability to create original paintings. How did you come up with the idea of creating unique paintings using artificial intelligence?

Pierre Fautrel: Basically I’m living with my co-artists. We grew up together with those two guys; we always wanted to work together. And because we are living together we’re always discussing everything. One day, because Hugo is a machine learning researcher – he is an AI researcher basically, – he came home with images that were quite astonishing; there were a lot of different faces from the Internet, and those faces were kind of photorealistic, and we were mind-blown by those algorithms. We were mind-blown because those images were really good; and the philosophy behind that was mind-blowing because when you create art with a machine learning algorithm, who is the artist – is that you or is that the algorithm? What are the boundaries of the art? What is art? What is the artist? Can AI be creative? All those questions really interested us, and we spent about three weeks just talking about that every day, trying to find some answers. And one day we decided to go for it and create a series of projects that can be understood by everybody. We wanted all pieces to be well-known everywhere in the world, and classical European art is kind of iconic, that’s why we decided to create this first series, La Famille de Belamy.

Sputnik: How exactly does the algorithm work?

Pierre Fautrel: It’s really complicated and really easy at the same time. Basically, you feed the algorithm with a lot of images; it scans them and finds common patterns between all of those images. For example, in La Famille de Belamy series, we wanted to do classical portraits; so, we fed the algorithm with 14 thousand portraits, it scanned them and understood that a portrait is always a head and shoulders, the eyes, the nose, the mouth, and some perspective. And from the rules it understands by itself, it creates new samples; and this is basically the whole algorithm. A good metaphor is when you show a book about dinosaurs to a child, they see all the dinosaurs; and in the end they understand what a dinosaur is, and they paint a new dinosaur. This is exactly the same for the algorithm: you show it lots of portraits, and it creates a new portrait.

Sputnik: Is it possible to detect the difference between works created by humans and artificially-generated paintings?

Pierre Fautrel: It’s a tricky question. If the question is whether the art passed tests, I would say yes, since a long time. The artistic production nowadays is so diverse that, of course, it could be made by a human, it should have been made by a human; you can see such strange and different things that you can never say that it was created by an algorithm. So, yes, our paintings fool the eyes; that’s not because they are very photorealistic, it’s because the art production now is so diverse, there’re so much differences that it’s difficult for you to say that it’s not human-made.

Sputnik: The work went under the hammer at Christieʼs for over 432 thousand dollars, making it more expensive than some of the work of the world's greatest artists. Do you think the price of the piece reflects its true value?

Pierre Fautrel: Who knows? The only thing about this price, the truth about this price is that we’ll see it in the next decades. It was a historical moment. Can you price a historical moment? Not really. If your question is whether we, as artists, deserve to have half a million for this work […] It’s not that all our works have that price; it’s because that one is the first. And because of that we’ll see whether in a hundred years when a lot of people are doing AI stuff, of course it will be real art; but for now it’s a bit strange. How much would you pay for the first ever art photography? A lot. And that would be far more than half a million dollars.

Sputnik: After some time, the novelty will fade and AI paintings will not be so expensive. Will there be demand in the future?

Pierre Fautrel: There is, I can promise you. We have sold-outs; of this series there’re only two artworks remaining. Out last series, the Japanese prints, was kind of the same. There’re a lot of people asking us to produce a lot of different stuff. There is demand for that. And I heard that it is the same for all the artists of the field. So, there is a big demand for that. There’re art collectors from everywhere in the world; but I’m sure that they will come. It’s just about taking time. Photography became the world’s largest movement in one year. It was just last year.

Sputnik: Are you going to prepare an exhibition featuring paintings created by artificial intelligence?

Pierre Fautrel: There’s one opening now. It was first in St. Petersburg, in the Hermitage Museum; now it’s in Saudi Arabia, in the most well-known museum there, which is called King Fahd Cultural Center. Also I’m going to China next week to the National Museum of Beijing. Those are really big museums, and they are exhibiting our works. We would love to do an exhibition in Paris too; we are trying to figure it out. I’m not sure yet, but this is something we want to do.

Sputnik: Obvious is driven by a common sense approach, taking advantage of new leaps in Artificial Intelligence and Machine Learning. One of your goals is to explain and democratise these advances through your artwork. Could you explain in more detail how exactly “Obvious” is going to democratise these processes? Why do you see it as an important goal?

Pierre Fautrel: We are three young guys and we know that for a lot of people, and especially for my mother, AI are robots, like from the film ‘I, robot.’ And this is fake; that’s science fiction. We try to explain to people that those are tools, which are incredibly powerful, but still tools. And so, with our art we try to explain that those algorithms are incredible to enhance your creativity and to create new artworks. And this is what we are trying to explain in that sentence: we want to democratise the use of AI to create art; we want new people to use it to create. And that’s pretty much what we want.

Sputnik: Do you have any 'art' apps on your phone like Visio?

Pierre Fautrel: Yes. The art app I’m using right now is DailyArt. It’s classical recommendation system app, which every day shows you a piece of art and tells you the story behind it.

Sputnik: Do you want to create something like that?

Sputnik: What are your plans for the future?

Pierre Fautrel: We are artists. We are not a company producing software; we are not a company making products. We are artists and we want to do art. So, in the years months and years we want to do sculptures; we are going to do cave paintings, like prehistoric art. And we are going to create a mini-series about Leonardo Da Vinci. This is our main goal, democratisation through art creation. But also we consider that artists on our times are not only people who create fine art pieces. For example, artists we love, a lot of artists are multidiscipline artists. Those diverse aspects are really important; and we want to do video clips, we want to do fashion, we want to do a lot of different creative things, because a lot of different creative people are artists and they deserve to have this technology. This is something we just did; those are shoes created with AI. The model generated those shoes, and we create them for real. And those are pieces [of art] because we consider that the guys who created sneakers are also artists; and our technology can help them. We are working on a lot of projects like that with our friends to explain to people that art is not only on canvas; it has a lot of different expressions, like film, video clips, video games, cuisine, a lot of different things.