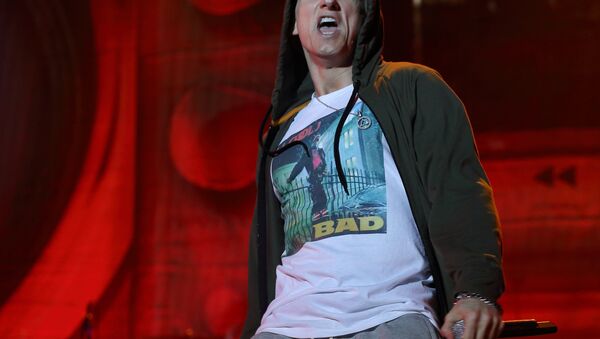 A new report by BuzzFeed News reveals that US Secret Service agents interviewed American rapper Marshall Mathers, also known as Eminem, last year because of his “threatening lyrics” against US President Donald Trump and his daughter, Ivanka.

Through a Freedom of Information Act Request, BuzzFeed was able to obtain 40 redacted pages of documents from the Secret Service that proved that agents interviewed Eminem over his lyrics in his song “Framed” from his album “Revival.”

According to the Secret Service, Eminem exhibited “inappropriate behavior,” and the agency noted that through his lyrics, the rapper “threatens protectee,” referring to Trump and Ivanka.

“I want to know if your agency is investigating Eminem for his threatening lyrics about First daughter Ivanka Trump,” the TMZ employee wrote in an email to the Secret Service. According to the documents, one of the threatening lyrics was aimed at the commander-in-chief: “Time to bury him, so tell him to prepare to get impeached.”

In another verse, Eminem made threatening comments toward Ivanka:

"Donald Duck's on as the Tonka Truck in the yard/But dog how the f**k is Ivanka Trump in the trunk of my car/Gotta get to the bottom of it to try to solve it/Must go above and beyond, 'cause it's incumbent upon/Me, 'cause I feel somewhat responsible for the dumb little blonde girl/That motherf**kin’ baton twirler that got dumped in the pond”

According to the Secret Service documents, this was “not the first time” that Eminem’s lyrics were threatening toward the president and his family, citing a 2017 freestyle in which the rapper made similar comments toward Trump.

Secret Service agents interviewed Eminem on January 16, 2018, after conducting a background check on the rapper through the agency’s Protective Intelligence and Assessment Division.

“Mathers was familiar with the song and began [to] rap along with the interviewers as the verse was read,” the documents state.

“At the conclusion of the interview, Agents again offered to answer any questions. It was also explained that any additional questions about this investigation should be directed to the USSS [United States Secret Service] Office of Government and Public Affairs. Counsel then escorted Agents from Mathers’ office,” the documents add.The interview was discussed during a Secret Service meeting two days afterward. However, agents decided that the case would be “non-referred” to a federal prosecutor, according to BuzzFeed.