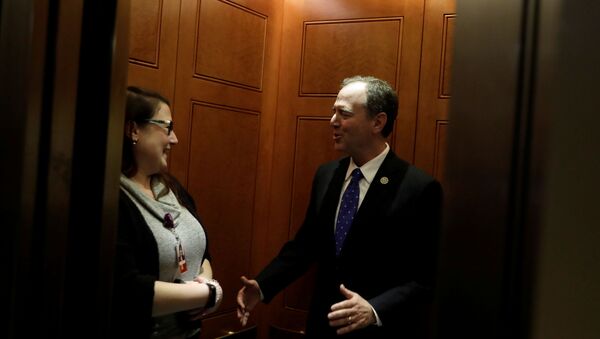 WASHINGTON (Sputnik) - US House Minority Leader Michael McCaul along with congressmen Jim Jordan and Devin Nunes in a letter to House Intelligence Committee Chairman Adam Schiff called for the whistleblower in the Trump-Ukraine scandal to testify publicly before Congress.

"As the so-called impeachment inquiry gathers information that contradicts the employee's allegations, we ask that you arrange for the committees to receive public testimony from the employee and all individuals he or she relied upon in formulating the complaint," the lawmakers said in the letter on Wednesday.

The lawmakers said Schiff earlier claimed that the whistleblower in question would provide "unfiltered" testimony soon. However, they said Schiff then reversed course following revelations that the employee had a bias against President Donald Trump.

The Republican lawmakers said the failure to arrange public testimony of the anonymous whistleblower to House investigators may be considered as evidence of Schiff's denial of fairness and due process.

Earlier in the day, the advocacy group American Oversight said in a press release that a US federal judge plans to order the State Department to turn over documents detailing administration contacts with Ukraine, including work done by President Donald Trump’s personal lawyer Rudy Giuliani.

The group based its claim on documents obtained using the US Freedom of Information Act (FOIA).

"Despite the ongoing obstruction of Congress, the Trump administration will now have to start releasing records concerning its dealings with Ukraine," American Oversight Executive Director Austin Evers said in the release.

Federal Judge Christopher Cooper ordered lawyers for the group and the State Department to narrow the scope of documents in the FOIA request to eliminate documents likely to be exempt from release.

The judge said he plans to issue an order for State to produce the resulting documents within 30 days.

On 24 September, US House Democrats launched an impeachment probe over a whistleblower complaint that claimed US President Donald Trump might have abused his power by allegedly pressuring Ukrainian President Volodymyr Zelenskyy during a 25 July phone call into investigating Joe and Hunter Biden for corruption.

Trump has denied the allegations of misconduct, released the transcript of the call and characterized the impeachment inquiry as another political witch hunt aimed at reversing the result of the 2016 US presidential election.