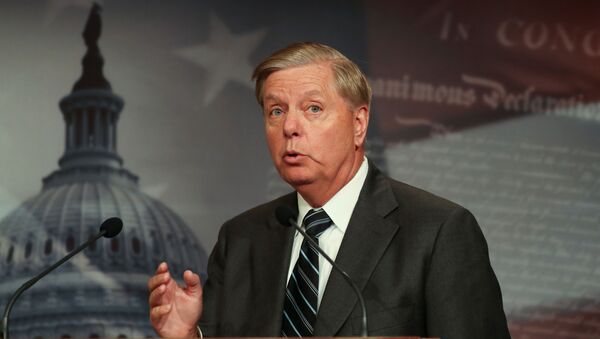 © REUTERS / SIPHIWE SIBEKO
Subscribe
Republicans are gearing up to resist moves by House Democrats to impeach US President Donald Trump. Private hearings are being held to gather information about allegations of abuse of power in regard to Ukraine by the US president, with fierce opposition from Trump supporters in government.

Senate Republicans introduced a resolution on Thursday condemning the impeachment inquiry against President Donald Trump launched by House Democrats, demanding the House of Representatives hold a vote on the process.

The resolution calls on the House to hold a formal vote before beginning the impeachment inquiry, arguing that the House should give the president "due process" and "the ability to confront his accusers", as well as giving Republicans the ability to submit subpoenas of their own.

“Every American should be disturbed by what is taking place in the House of Representatives regarding the attempt to impeach President Trump”, Graham said in a statement.

"We cannot have a country where every American has rights except Donald Trump. I find the current process illegitimate and dangerous to the future of the presidency", he added.

1️⃣ calls on the House of Representatives, prior to proceeding any further with its impeachment investigation into President Trump, to vote to initiate a formal impeachment inquiry;

​Graham revealed on Thursday that he suggested putting together a White House impeachment "messaging team", while speaking with acting Chief of Staff Mick Mulvaney.

While speaking to reporters, Graham said "I talked to Chief of Staff Mulvaney. I think they're working on getting a messaging team together".

This comes after he raised concerns the previous day that the administration needed to be better organized and efficient in delivering it's impeachment message.

"What's missing here I think is that coordinated effort to put somebody in charge of developing a message and delivering it", he said on Wednesday.

Speaker of the House Nancy Pelosi noted that a vote is not required, causing significant backlash and allegations of defying due process.

Nancy Pelosi refuses to follow precedent in calling for a formal vote on impeachment in the House.

This is illegitimate, purely partisan & a sham!

Democrats are DESTROYING due process & refusing to treat @realDonaldTrump fairly - this is a COUP! pic.twitter.com/5hOAk6KsbS

​Graham first suggested a resolution requiring the House to hold a vote during a hearing this week while talking to Sean Hannity on Fox News.

"This resolution puts the Senate on record condemning the House. ... Here's the point of the resolution: Any impeachment vote based on this process, to me, is illegitimate, is unconstitutional, and should be dismissed in the Senate without a trial", Graham said.

The resolution follows mass opposition by Republicans to the House impeachment inquiry, and the daily holding of closed-door hearings involving former administration officials who are giving testimony concerning allegations of Trump's abuse of office.

Accusations of abuse of power by the president emerged after a whistleblower complaint was lodged regarding a phone call between Trump and Ukrainian President Volodymyr Zelensky in July.

The accusations centre around whether Trump withheld aid to Ukraine to pressure the country into investigating allegations of corruption on the part of Joe Biden and his son Hunter Biden.