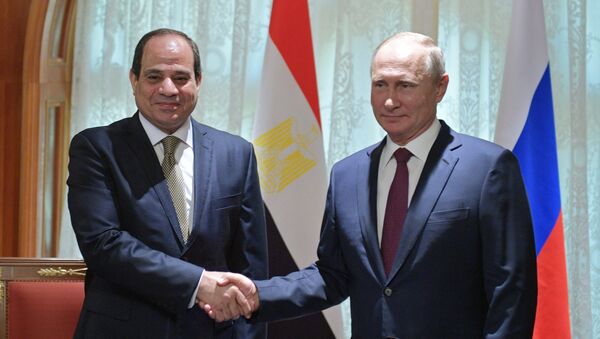 SOCHI (Sputnik), Andrei Savenkov - Russia will start taking in Egyptian specialists to train them for the subsequent employment in the construction and running of the El Dabaa nuclear power plant (NPP) in 2021, the head of the Rossotrudnichestvo, a Russian state agency responsible for the tuition-free scholarship program for foreigners, said.

At the Russia-Africa summit on Wednesday, Egyptian leader Abdel Fattah Sisi invited Russian President Vladimir Putin to attend the ceremony marking the start of the construction of the El Dabaa nuclear power plant, which Russia’s Rosatom is helping to build.

The deal was signed in 2015, with the El Dabaa NPP set to become Egypt's first nuclear power plant.

"I think that it will not be a big number [of specialists] at the start. Rosatom estimates the need at 600 people starting from 2021. The specialists, including engineers and construction workers, should be trained for a few years," Eleonora Mitrofanova said on the summit’s sidelines.

Rossotrudnichestvo cooperates with Rosatom on sending foreign nationals to study in Russia for subsequent involvement in the construction and maintenance of NPPs, where the company is involved.

The Russia-Africa summit and economic forum is running in the Russian resort city of Sochi from 23-24 October.